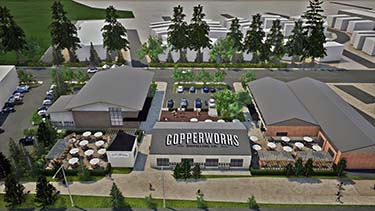 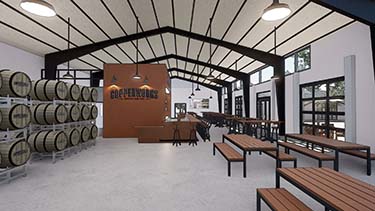 [enlarge]
The first phase of development in Kenmore includes a restaurant and barrel storage.

Seattle distiller Copperworks has been selling its spirits for just eight years, but already needs to expand production by tenfold to meet projected demand.

Co-owner Jason Parker said his company is using crowdfunder StartEngine to raise up to $5 million to pay for a three-phase expansion that includes new facilities in Kenmore and doubling the space of its current location at 1250 Alaskan Way near the Seattle waterfront.

The first phase of expansion, just getting started, involves a remodel of nearly 5,000 square feet of space vacated by 9 Yards Brewing Co. after it closed late last year. The building is on a long parcel adjacent to the Burke-Gilman Trail at 7324 N.E. 175th St. in Kenmore.

Parker said the Kenmore space will have a restaurant, cocktail bar, event center and barrel storage. He said they signed a 5-year lease with extension options for the space.

Parker said the cost of developing the space, with equipment, is in the ballpark of $1.5 million. Selective demolition is scheduled to begin next month, followed by construction in 2022. Parker said they hope to have the space open by early summer 2022. Its capacity will be about 150-175 patrons in both indoor and outdoor seating.

Cardinal Architecture is finalizing designs for the restaurant and BMDC Services is the general contractor.

Copperworks' second phase of expansion would add nearly 7,000 square feet of bar, restaurant, event and educational space next door to its existing space in the 51 University building, which faces Western Avenue on one side and Alaskan Way on the other. This vacant space is on the other side of the wall from the distillery, where Modern Sofa once operated a furniture store.

Parker said event space will be on the second floor and the bar and restaurant will be on the ground floor. Each space would be able to handle about 125 patrons. He said the restaurant would be hood-less so alterations wouldn't be needed to the historic building. The menu will be based on Northwest cuisine.

Parker said they have a letter of intent signed for the space with Unico Properties and have 17 years remaining on their lease in the existing space. He said they will move forward on this phase as soon as crowdfunding reaches $3 million. It's currently near $1.3 million.

A Copperworks' news release says the Seattle waterfront is expected to see more than 20 million visitors per year once current construction projects are completed, including the massive redevelopment of the waterfront. This expansion will bump daily visitor capacity at the distillery from 150 to 575 guests.

The final phase will kick in when crowdfunding hits $5 million. It will build a new production facility on the Kenmore site that will allow Copperworks to expand from 120 to 1,200 barrels per year.

Parker said this will be a new building, but he didn't know how big it will be at this point.

The production facility will actually be a brewery, which might sound odd for a company focused on making whiskey, vodka and gin. Copperworks bases its spirits on beer, without the hops. The company says this produces flavors not possible with more traditional methods.

Parker said they currently partner with three local breweries — Elysian Brewing, Pike Brewing and Fremont Brewing — to get their base for the distilling process. He said they will continue to partner with the three breweries after Copperworks opens its own brewery.

Parker said the future of Copperworks could include investment partners, forming limited partnerships, a merger, or acquisition by a like-minded company. He said there are no plans for a traditional public stock offering.