Glass Jar Greenhouse in Duvall is a masterpiece of up-cycling 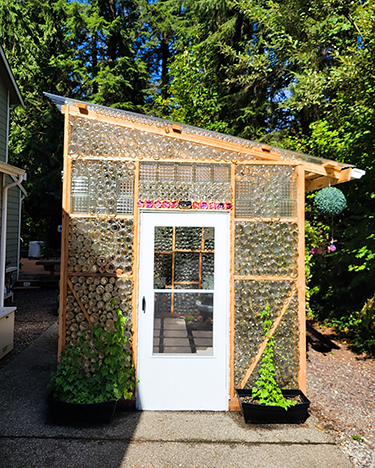 Photos by Axton Burton [enlarge]
The greenhouse exterior is made from a total of 4516 jars. 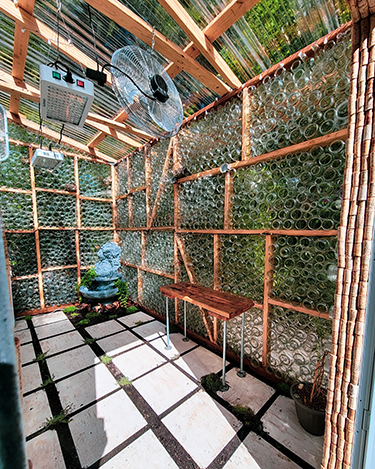 [enlarge]
Some of the jars face outward to encourage birds and bees to make nests.

Axton Burton may not have any formal design or engineering experience but they have created a project that has attracted international attention. The project in question is the “Glass Jar Greenhouse” made using a plethora of re-purposed materials. A masterpiece of up-cycling and re-purposing, a total of 4516 jars of all shapes and sizes – from nail polish to pasta sauce bottles - make up the green house exterior. These sit within a wood frame built with 2Ã—4 lumber beams, topped of with a plastic roof. In total, the green house measures 8 x 12 x 12 feet.

The project came about when Axton needed a place to house their “particularly prickly potted plants” and the studio apartment in Renton that they share with husband James just wasn't big enough. Axton headed to Google for an answer but found that everything was either not the right size or was too expensive and the idea to build the greenhouse was born. This was in January 2020, just before the pandemic, and Axton says that the project and people's response to it has helped them get through the last year and 10 months.

The jars are not the only re-purposed element of the greenhouse. Corks are used to make a door frame, some of the jars are filled with glass beads which adds a pop of color, there are cat food tins stuck on the framing used as holders for tealights, and an old wine barrel has been re-purposed as a rainwater reservoir. Whilst almost everything is re-purposed, the wood framing, plastic roof, and glue used in construction cost around $3,000 about half the price of a comparable sized greenhouse that Axton found online.

The greenhouse sits at Axton's parents property in Duvall. The project has been very much a family affair. Axton's dad built the wood frame, partner James has been closely involved from the get go and James's father, who has a background in construction, aided with the design.

“It was so nice to work on this together, especially during the pandemic,” Axton reflected.

The broader Duvall and Redmond communities have also been involved from start to finish. When Axton first had the idea for the greenhouse they posted on online local boards and community pages asking for glass jar donations.

“People from seven or eight different cities offered donations and I would drive to pick the jars up,” Axton shared. “Now a lot of these people come and see the greenhouse and say ‘hey that's my jar'.” To mark the community involvement and the people that bought this project to fruition, Axton has hung two bamboo sticks from the roof of the greenhouse. Lids from the re-purposed jars hang from the bamboo and are marked with the names of visitors and contributers and decorated with nail polish from the re-used polish bottles.

Axton is still working on some finishing touches and is currently plugging in remaining gaps between the jars with moss for insulation. Once complete, the greenhouse will be home to an array of exotic plants including Jasmine plants and Starfruit. An inside water fountain gives the space a feeling of peace and serenity and LED lights help it “feel like a warm cabin inside.”

“There was a lot of trial and error and it has been a journey but I'm so happy with it and with the community reaction,” Axton concluded.

Since word of the project has spread, Axton has been sent similar projects but there is nothing quite like this greenhouse. Axton and James plan to see how the greenhouse survives its fist winter but do have eyes on more glass jar projects in the future and hope that the greenhouse inspires others to create their own renditions.