On the Block: Stanford Hotels' tower grows to 57 stories

The hotel and apartment tower planned for 1903 Fifth Ave. had its final design review meeting last August, but the specifications have changed a bit since then.

On what is currently a surface parking lot at the northwest corner of Fifth and Stewart Street, Stanford Hotels Group of San Francisco is now proposing a 57-story tower, up from 52 floors.

That translates to four more floors of apartments, and one more floor of hotel rooms. And while the hotel was previously sandwiched in the middle of the tower, it has now been moved above the apartments, closer to the hotel's sky lobby.

Stanford has revised its master use application, originally submitted last year, and is preparing an addendum to its Downtown Height and Density Environmental Impact Statement. The city has scheduled that information to be published in today's land-use information bulletin, and comments are due by Aug. 23.

Renderings by MG2 [enlarge]
Part of the above-grade garage levels will be covered with a “decorative art screen” but there will also be eight “art studios,” with kitchens and bathrooms, on floors two through five, facing Stewart and Fifth.

The changes follow the city council vote in April to upzone downtown and South Lake Union as part of the Housing Affordability and Livability Agenda (HALA).

The latest plans for the tower filed with the city look like this, from top to bottom:

• A restaurant on level 56. (Stanford had previously announced those spaces would be open to the public.)

• Hotel lobby and restaurant on level 55; with the hotel gym and amenity spaces on level 54.

• 264 residential units, plus amenity areas, on levels 39 through eight. The unit mix will range from studios to three-bedroom, though about half will be one-bedroom.

• Resident amenities on levels seven and six, including a terrace.

• Parking for 149 vehicles on levels five through two, plus four levels below grade.

• Ground-floor retail of about 3,000 square feet, plus the hotel entrance.

The tower height will be 550 feet. Total project size, including the parking, will be about 661,000 square feet.

Parking will be accessed from both Fifth and the alley to the west. There will also be parking for 188 bicycles in four bike rooms, for both residents and hotel guests.

Some hotel rooms and apartments will have small balconies. Apartment residents will share a large terrace on the sixth floor, with a dog run, barbecue station, and other indoor amenities.

So why is Stanford putting the lobby way up on the 55th floor?

[enlarge]
The 228-room hotel, previously in the middle of the tower, will be above the apartments with a sky lobby.

“It's unusual. It's atypical, but they've done it elsewhere,” says Andy Olsen of Columbia Hospitality, who has no role in the project. “That's kind of premium space. Those upper floors are valuable.”

In a different development scenario, says Olsen, the upper floors would house luxury apartments and amenities for residents. Though Stanford hasn't announced a hotel partner, Olsen speculates, “If it's a luxury brand, that upper level may be consistent with the brand. The high end is up high. A marquee brand can sometimes request that of a developer.”

The apartments won't have quite the same view, but that may not matter to tired Amazon workers who just want a short walk home. Olsen asks rhetorically, “Do those people want a view or to be convenient to work?”

Stanford's calculus may be that Seattle's hot hotel market can easily absorb a premium and relatively small niche brand, while the downtown apartment market is so robust that views don't matter so much.

The 1903 Fifth project also includes what are described as eight “art studios,” with kitchens and bathrooms, on floors two through five (the parking levels). They will be on the prominent corner facing Stewart and Fifth, arranged two per floor. The lofts are not included in the apartment numbers above; nor does Stanford include them in its overall project calculations.

They might be intended as affordable housing for artists, though no such incentives are mentioned in the project documents. Or they might be a city code compliance measure that above-ground parking be effectively prettified to passing eyes — in this case monorail riders.

Efforts to reach Stanford for comment were unsuccessful. The above-grade garage levels are otherwise covered with what's called a “decorative art screen.” Tenants in those eight corner units will have front doors opening into the garage, which is served by both the main elevator core and stairs.

The project will share a busy block with the 30-story Escala condominiums and Douglaston Development's planned 48-story hotel/apartment tower at 1933 Fifth, on the site of the Icon Grill building.

Prior plans by other developers for 1903 Fifth have included an 18-story hotel and a 46-story hotel/condominium tower. Those plans did not advance, and a Stanford LLC acquired the property out of foreclosure proceedings in 2013 for $16.75 million (that's $1,292 per square foot). Stanford briefly considered some condo units for 1903 Fifth, but dropped the idea. 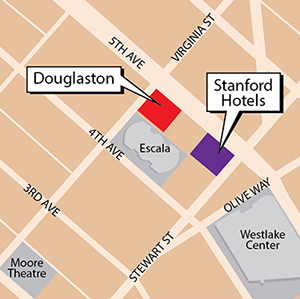 Today, with both Amazon and the convention center expanding, demand for apartments and hotel rooms in that area is expected to be strong.

The Downtown Seattle Association recently estimated that there are over 2,700 hotel rooms now under construction downtown, and an equal number are being planned. DSA says the downtown hotel occupancy rate is 92 percent, compared to a national average of 70 percent. Kidder Mathews, in its second-quarter and December reports, said that downtown and South Lake Union are the strongest local hotel submarkets. For Seattle as a whole, however, KM did warn, “The current wave of hotel development in and near Seattle is about to crest. After several years of very strong performance, particularly in urban markets, we expect that the coming increase in supply will outpace growth in demand.”

Privately-held Stanford owns and operates its hotels, most of which carry well-known brands like Hilton, Marriott and Sheraton. It also uses the Altitude brand — listed on early design materials for 1903 Fifth — for its lounges and restaurants in San Diego and Honolulu, both of them atop Hilton-flagged hotels.

Stanford was founded in 1985 by Lawrence Lui, who also runs Cresleigh Homes, an active homebuilder in California and Arizona. Lui is a son of Hong Kong billionaire Lui Che-woo, whose holdings include Galaxy Entertainment (a major casino and hotel developer in Macau), K. Wah Group (a large property and resort developer and builder, among other interests) and Stanford Hotels International.

Meanwhile, Stanford is also developing the 15-story, 283-room Marriott SLU at 300 Terry Ave. N. That project, Stanford's first investment in Seattle, has a MUP. Demolition and construction permits were issued, but construction has not yet begun. Stanford says it will act as its own general contractor. Jensen|Fey Architects designed the project.

In 2012, Stanford paid $6.35 million for the 13,560-square-foot corner property, which is right next to the Brave Horse Tavern and surrounded by Amazon office buildings.