Early last year, Seattle Central College sought letters of interest from developers to build affordable housing at 1515 and 1519 Broadway, between East Pike and Pine streets, along with a separate site across the street on East Pine (the South Annex; more on that below).

There are two adjacent one-story buildings on the Broadway properties: the Atlas Building at 1515 Broadway, and the Eldridge Tire Co. building at 1519, which was landmarked last spring. (It's also sometimes called the Broadway Cafe building.) Both were once part of Capitol Hill's old auto row.

Capitol Hill Housing and Mithun have now filed an early plan for the combined 14,356-square-foot midblock site, which is zoned up to 65 feet. With HALA incentives (the Housing Affordability and Livability Agenda), that height could be raised. The working title for the project is The Eldridge.

Photo from Puget Sound Regional Archives [enlarge]
There are two buildings on the Broadway properties: the Atlas Building at 1515 Broadway, and the Eldridge Tire Co. building at 1519, shown here in 1937. 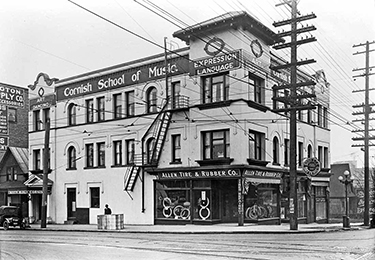 Photo from Seattle Municipal Archives [enlarge]
The nonprofit YouthCare may develop this property at Broadway and Pine, shown here in 1937.

The early plan is for about 82 permanently affordable units in a seven-story building. Units would range from studios to two-bedrooms. They would be restricted to individuals and families earning up to 60 percent of area median income.

There would also be about 4,800 square feet of retail.

No parking is required or provided for the site, which is close to Capitol Hill Station and the streetcar. A bike room would be accessed from the alley to the west. A roof deck, tenant lounge and other amenities are planned.

CHH estimates the cost will be around $26 million.

The facade of the 1925 Spanish mission-style Eldridge Tire building, with its two retail bays flanking an auto entrance, will be preserved. Mithun says efforts will also be made to preserve the face of the Atlas Building facade, though it is less intact.

Arthur Eldridge (1873-1954) began selling Buicks on Capitol Hill in 1912, according to the Johnson Partnership's historical report on the building. He eventually expanded operations to Ballard, Spokane, Everett, Yakima and other cities, and also had interests in insurance and auto financing.

CHH intends to buy the Eldridge site late this year or in early 2019, and will secure funding from a variety of sources this fall — including the Seattle Housing Levy, city Office of Housing, tax credits and loans. Construction could start next summer and be completed by late 2020.

The Eldridge site is owned by the state on behalf of SCC. However, in an agreement made last November, Sound Transit will swap its so-called Site D, a few blocks north at 1821 Broadway, for SCC's Eldridge site.

The surplus Site D, now a parking lot, totals 10,383 square feet. SCC intends to eventually develop it with two other contiguous parcels for a new building next to its existing Science and Math Building to the west.

Thus, Sound Transit might become the interim owner of the Eldridge site, until CHH acquires it — though the actual timing of the swap is unclear.

Immediately north of the Eldridge site, CHH previously co-developed the 44-unit Broadway Crossing, at 815 E. Pine St., on the corner above Walgreens.

Meanwhile, CHH is planning 110 units nearby at Station House at Capitol Hill Station, 115 units in the Liberty Bank Building and about 120 units at 23rd and Union, aka the MidTown Center block. The latter is a venture with Africatown, to be called Africatown Plaza.

CHH says that Liberty Bank Building is now underway, and Station House should break ground this summer — along with three other buildings being planned by Gerding Edlen at Capitol Hill Station. CHH says that The Eldridge will probably begin before Africatown Plaza.

Separately, the other SCC property being offered for redevelopment comprises 907 and 909 E. Pine St. and a parking lot to the south at 1534 Broadway. Those three parcels are collectively called the South Annex. They total 15,360 square feet, and are on the southeast corner of Broadway and Pine. They are also owned by the state.

The Washington Department of Commerce's Office of Homeless Youth offered the South Annex as a surplus property last year, and the winning proposal came from YouthCare, a nonprofit that serves homeless youth.

YouthCare's Jody Waits says that it has essentially secured the right of first refusal to buy the South Annex. “We are the lead on the project. We are currently in a very detailed feasibility study. We are working on a memorandum of understanding and a purchase-and-sale agreement.” That sale could close this fall.

YouthCare has secured $2.5 million in initial funding from the state and city, but has yet to decide what entity — possibly a joint venture or partnership — would actually buy the South Annex. CHH will be the housing partner.

The basic program is for affordable housing, with space for YouthCare's education and employment programs. Some number of transitional units for homeless youth is also likely.

Waits calls the South Annex “the largest and most impactful project that YouthCare has ever considered.” She says the nonprofit will continue to operate the Orion Center, at 1828 Yale Ave. in the Denny Triangle, and has no plans to sell. That triangular parcel, with 9,738 square feet, was acquired in 2002 for $1.8 million. It was formerly the Paul Weir Porsche building, and is located just south of the Denny Way overpass across Interstate 5. The site is zoned up to 440 feet and has tremendous redevelopment value.

But Waits says YouthCare plans to separate the shelter, at Orion Center, from its future education and employment training at the South Annex site.

The South Annex currently has two small century-old buildings that are used for various college purposes. Neither is landmarked, though the three-story building on the corner — the Booth Building — might be nominated. “We are open to being preservationist,” says Waits.

The Booth Building was constructed in 1906 and served as an early location for the Cornish School of Music. Subsequent tenants included Burnley School of Art (which became Seattle Art Institute) and Seattle First National Bank.

CHH says there's no plan yet for complete demolition of the South Annex. It's possible that an L-shaped building could wrap around the Booth Building, which YouthCare says needs substantial upgrades.

CHH says that it's planning 72 units for the site. Says Waits, “We are preparing an RFP for an architect.”

No timeline has been set for that project, though Waits says YouthCare feels considerable urgency about “this [homelessness] crisis that is just engulfing our city.”