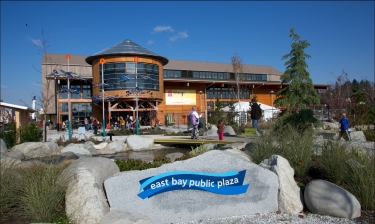 Photo from http://www.visitolympia.com [enlarge]
Sea-level rise will make flooding in downtown Olympia a regular occurrence in coming years. The city is making plans to protect infrastructure and buildings such as the Hand On Children’s Museum, which opened in 2012.

The remote South Pacific island nation of Tuvalu has served as a reluctant poster child for the threat of rising sea levels caused by warming oceans and melting ice sheets.

Tuvalu's highest point is just 16 feet above sea level. Officials fear rising sea levels could wipe the country off the map. Its government appealed to Australia and New Zealand in 2000 to take in its citizens if evacuations become necessary.

Though that's an extreme case, the effects of rising sea levels will be felt all over the world in the years to come — including around Puget Sound.

Downtown Olympia — at about 18 feet above sea level — is particularly vulnerable.

According to 2015 report by University of Washington's Climate Impacts Group, “Sea-level rise will permanently inundate some low-lying areas and will increase the frequency, depth and duration of coastal flood events by increasing the reach of storm surge and making it harder for flood waters in rivers and streams to drain into Puget Sound.”

In Olympia, plans to mitigate the impacts are well underway. The city has been keeping tabs on climate change research since the early 1990s.

By early 2018 the city expects to recommend to the City Council specific projects to address the effects of rising sea levels, including a funding strategy and regulatory recommendations. A 2011 estimate put the implementation cost at around $60 million.

Andy Haub, the water resources director for Olympia Public Works, said his department has been giving the City Council annual updates on climate trends since 2007. The 2016 presentation is available online at http://bit.ly/28PQ74P.

Olympia sits where the Deschutes River empties into Budd Inlet at the south end of Puget Sound. Its downtown has a long history of flooding, which the city manages with infrastructure such as pumps and tide gates.

That's good enough for now — Olympia experiences “nuisance” flooding, the type that leads to inconveniences such as road closures, only once or twice a year. But rising sea levels would mean such floods would occur far more often.

Even if carbon emissions — a primary contributor to global warming — had screeched to a halt last year, sea levels are still expected rise more than 4 feet in the coming centuries. Waiting until 2020 to reduce carbon emissions would ensure a sea-level rise of almost 8 feet, according to research compiled by the city.

With just a 4-foot sea-level rise, Olympia expects to see nuisance floods jump to almost 440 times per year. That's not a typo: More than half of Olympia's high tides could bring floods.

In addition, downtown Olympia appears to be sinking at a rate of nearly an inch per decade. Over the next century, sea-level rise could be 11 inches greater in Olympia than elsewhere.

He said it's hard to know when sea levels will rise or by how much. Different research groups, such as the National Oceanic and Atmospheric Administration and the Intergovernmental Panel on Climate Change, offer different estimates.

“That feels soon for us,” Haub said. “It takes a long time to develop major capital projects. We don't have all the answers but we need to start.”

Haub said the city is coming out of the gate with one big advantage: Much of the affected shoreline area is publicly owned, easing the path to taking action.

The area of concern for Olympia is limited mainly to its downtown and Port of Olympia property to its north. Shoreline owners in those areas include the port, city, state of Washington and the LOTT Clean Water Alliance. The Capitol campus, situated on higher ground south of downtown, would be unaffected.

“We've been intentionally maintaining ownership of shoreline for years knowing that would be a key to (addressing) sea level rise,” Haub said.

New downtown structures would be required to be elevated, for example, and existing structures could be retrofitted to avoid major flood damage.

Olympia is considering flood-control tactics employed by other cities, such as Miami Beach, Florida, which is rebuilding public streets to remain above water and serve as flood barriers.

New flood walls or gates could be built in some locations, designed to hold back water. Parks vulnerable to flooding could install elevated landscapes.

The city is also looking at consolidating drainage systems and installing pumping stations to get Moxlie Creek and stormwater runoff out of downtown. Separating existing combined sewers may also help protect the LOTT wastewater treatment plant from being overwhelmed during flooding, according to the city.

Olympia could even consider regrading parts of its downtown as Seattle's Pioneer Square once did to improve its elevation. Another idea is to build a marine flood barrier across Budd Inlet, north of the city.

Haub said the most effective short-term actions include requiring new structures to raise their floor elevations another foot, and to install more tide gates to keep Budd Inlet out.

Longer term, he said the city needs to focus more on landscaping and increasing elevation levels, and installing temporary barriers when tides get high.

The city is already taking measures such as making drainage improvements and maintaining tide gates.

Despite the high costs and uncertainty of responding to the effects of climate change, the community has been engaged and responsive to concerns about flooding.

“As a community we're ready to start developing a response plan,” he said.