The engineering design challenges of ShoWare Center started below the ground and continued up to the building’s highest point.

The project’s tight budget and restricted schedule also complicated design: the city of Kent wanted a lot of arena for their money, and they wanted it in time for the 2008 Thunderbird hockey season. Starting in early 2007, the game was on, and Magnusson Klemencic Associates, the project’s structural and civil engineer, worked with LMN Architects to develop a winning strategy.

ShoWare Center sits on “liquefiable soils,” meaning the ground beneath the building holds the potential to convert to a liquid state during an earthquake. Test drillings revealed the soil was not strong enough to support a large building using traditional foundations, with the upper 35 feet in particular needing to be strengthened or bypassed. 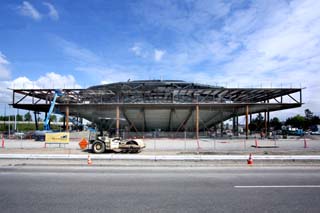 Photos courtesy of MKA [enlarge]
The center’s top-heavy appearance was influenced by poor soils, which required an expensive foundation system. The small base required fewer building-support points than a more conventional box-shaped design.

One soil-strengthening alternative considered involved digging holes through the weak soil, then filling them up with compacted rock, creating “rock columns.” Rock columns, typically spaced 10 feet apart on a grid, would have reinforced the soil enough to support the building, but they proved too time-consuming and expensive to construct.

Instead, MKA engineers opted to bypass the weak soil using pile foundations extending up to 70 feet below grade — nearly the width of the hockey rink — to bear on strong soil found far underground.

Trucking such long piles to the site would have been impossible, so the piles were built in place using a specialized machine that drills holes and then fills them with concrete before they can close. This also allowed the piles to be made only as long as they were needed at each individual location, reducing the amount of material required — an important consideration given that over 300 piles were required to support the building.

Because the first 35 feet of each pile is in poor soil and does not provide any support, the cost of the foundation system was still expensive, and minimizing the number of building-support points was a major goal.

This was one driving reason behind ShoWare Center’s unique “overhung” shape. Usually, the wall of the building would be brought down at the outer face of the building, and foundations required there. Because there was no arena usage calling for enclosure of this space at ground level, complex outrigger framing was used to “hang” the suites from the roof above.

Designing the building to “step in” as it went down minimized the foundation cost and extent of exterior architectural finishes. 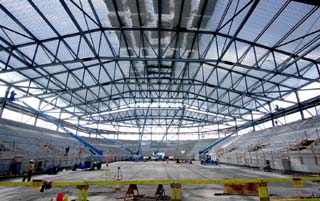 [enlarge]
A 50-foot clear height was needed to accommodate arena football. The roof slopes toward the seating areas to help cut costs.

The ice rink, located in the heart of the arena, is where the action happens. The city of Kent wanted ShoWare Center to host a wide variety of events, each of which required a unique arena configuration and floor load capacity.

In response, MKA engineered an ice rink floor that can support up to 500 pounds on every square foot — equivalent to piling 5 feet of soil across the whole arena floor! ShoWare Center can now handle everything from typical ice hockey games (calling for floor strengths of just 25 pounds per square foot) to arena-busting rodeo, motocross and monster-truck competitions.

Before the bulls, rigs and athletes could enter, however, the roof had to be raised — using a crane that weighs over 100 tons.

The contractor wanted to drive this very heavy crane down the center of the arena to lift the roof and seating into place, but the arena floor as designed would not support it. Delaying construction of the arena floor until the roof and seating construction was complete would solve the problem, but ShoWare’s tight project schedule did not allow that. Another alternative was to use two cranes lifting from outside the building, an option that would have been considerably more expensive.

Instead, MKA conducted further analysis and suggested a “zoned” solution. By thickening specifically targeted areas of the ice rink floor and adding just a few additional piles, the floor was strengthened in the precise locations needed to support crane operations. This optimized design facilitated the desired erection sequence, allowing construction to proceed on schedule while minimizing expense to the owner.

The shape of the roof was also influenced by somewhat opposing requirements. Concern with cost suggested a limited height, as a lower roof is generally less expensive, but plans for hosting arena football dictated a minimum 50-foot clear height, matching the trajectory of a football arc.

The solution, addressing both desires, can be seen in the arena’s final shape. The roof starts low over the seating area to minimize costs, then slopes up to provide the necessary height over the event floor itself, supported by a main roof truss that spans 200 feet.

The scoreboard can also transition from its usual hanging position for hockey by hoisting it up among the roof members, giving the central arena a flat underside roof when needed.

Mortenson employed the latest in construction technologies with their creation of a building-information model, a virtual representation of the arena developed using computer software.

Using this model, the building’s structural, architectural, mechanical, electrical and plumbing elements were coordinated and checked for conflicts prior to actual construction in the field. Thanks to this model, ShoWare Center required a minimal number of “field fixes,” helping to keep things on time and budget.

No need for pipes

ShoWare Center sits on a flat 17-acre site, located in a flood plain. A typical civil system would direct site runoff into a large storage device for incremental release over time, requiring many feet of large storm drain pipes and a large storage facility.

Instead, MKA developed a design that uses storage space within the soil under the parking lot to detain runoff. By using the site itself as a storage device, conveyance pipes were eliminated and the amount of imported detention facility soils cut in half. This eliminated roughly 1,800 truck trips to and from the site, and at least 30 percent of the earthwork and drainage construction costs.

It took an accelerated design schedule and a strict focus on performance, but Kent’s new ShoWare Center is now ready to compete with the best.

Robert Baxter is an associate at Magnusson Klemencic Associates and a member of the firm’s Sports Specialist Group.