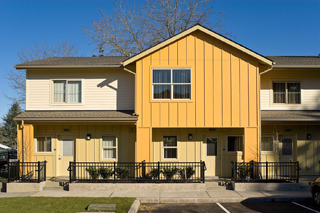 Synergy Construction is completing the first phase of $55 million in improvements at the former Springwood Apartments at 27360 129th Place S.E. in Kent. The complex has been renamed Birch Creek Apartments.

The first phase, which should be finished next month, involves renovating nine of the 32 residential buildings.

The units are getting new fiber cement siding, windows, doors, cabinets, counters, floor coverings, appliances, plumbing and electrical fixtures, fire alarms and sprinkler systems. An additional half-bath is being added along with a washer and dryer.

A central park and ecosystem enhancements to Soosette Creek, a salmon-bearing stream that bisects the development, are also part of the project.

A few families have moved back into some of the completed buildings. A total of 262 families will be housed in the low-income development when it is finished in June of 2010. Units are offered in one-, two-, three-, four- and five-bedroom configurations.

The project was designed by Kovalenko Hale Architects to meet a 4-Star Built Green certification by the Master Builders Association of King and Snohomish Counties.

Springwood was built in 1970 by the Boeing Aero Mechanics Union using HUD funding. After failing to draw renters, the complex defaulted on its mortgage and was taken over by the King County Housing Authority in 1976.