The economy is recovering. Two quarters of strong GDP growth and the emergence of job creation in March reinforce this point.

Once these impacts diminish, the core fundamentals of the economy must be strong enough to feed a sustained growth recovery. Keep in mind, many of the factors that gave rise to the economic distress — namely, tight lending conditions, high foreclosure rates and weak job markets — will remain in play during the second half of 2010, albeit at diminished rates.

The combined impacts of reduced transitory economic stimulus and continuance of adverse financial conditions imply recovery in the U.S. construction markets is expected to take place in the slow economic growth during the second half of 2010 and continue through the first half of 2011.

Cement use to rise 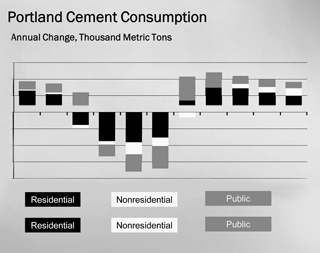 Source: PCA [enlarge]
Cement consumption is expected to pick up again after several years of declines, though nonresidential use may continue to lag till 2012.

The Portland Cement Association expects a modest 3 million to 5 million metric ton increase over severely depressed 2009 levels will materialize during 2010.

The modest anticipated recovery in cement consumption expected this year is not expected to come from the private sector. Of the 54 million metric ton peak-to-trough decline, 38 million metric tons, or 60 percent, are accrued to reduced private-sector demand.

The expected decline in nonresidential construction reflects depressed expected returns on investment, or ROI, for commercial properties as well as the difficulties in securing financing. These conditions are expected to remain in place through 2010. Once job growth materializes, the fundamentals facing nonresidential consumption will begin to improve.

Keep in mind, large inventory excesses among nonresidential properties must be burned off before a recovery materializes. This will delay an outright increase in nonresidential construction until 2012.

Residential construction has stabilized, but a substantive increase in building may be another year away. Homebuilders are unlikely to accelerate construction activity until two critical conditions are met: first, that the inventory of unsold new homes reflects no higher than a five-month supply, and second, that home prices rise or stabilize.

Both conditions are likely to be required to ensure an adequate ROI for homebuilders to spur an increase in building activity. Lacking either condition, a substantive recovery in home building will not materialize. Neither condition is in place now.

A reduction in new home inventories and stabilization in new home prices must occur in a near-term environment characterized by weak economic growth, high unemployment, likely increases in foreclosure activity, fire sale pricing of bank-possessed properties (which acts as a depressant on new home pricing) and the continuation of tight lending standards. Combined, this environment is hostile to any significant near-term improvement in the fundamentals that would lead to an increase in housing starts.

PCA expects ARRA spending will increase during 2010. More of this spending is expected to be on major highway construction projects, compared with 2009’s emphasis on resurfacing activity. This implies that ARRA spending will carry higher cement intensities this year than last year.

State deficits are expected to worsen during 2010. States have cut discretionary construction spending since 2007. Dramatic reductions materialized in 2009, leaving little more to cut or postpone.

Edward Sullivan is chief economist for the Portland Cement Association.