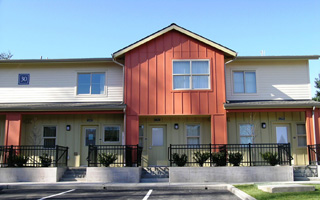 Photo courtesy of KCHA [enlarge]
The project involved the demolition of six buildings and renovation of 262 units in 32 buildings.

It was formerly called the Springwood Apartments and is located on a 26-acre site at 27360 129th Place S.E. in Kent.

The $55 million makeover involved the demolition of six buildings and renovation of 262 units in 32 buildings over a two-year period. Exteriors were redesigned, and faded vinyl siding was replaced with new materials.

The units have one to five bedrooms. Washers, dryers and half-bathrooms were added to all the units, as well as insulation, new heating and ventilation systems, and fire alarms and sprinklers. The work was designed to meet four-star Built Green standards.

Kovalenko Hale Architects was the architect and Synergy Construction was the general contractor. Most work wrapped up in the spring.

New landscaping and front yards have changed the look of the site by adding trees, shrubs and park space. A P-patch and places for activities or play were added.

The youth center replaced a smaller building that “was not conducive to a property with 1,000 kids,” said KCHA spokeswoman Rhonda Rosenberg.

Springwood Apartments was built in 1970 by the Boeing Aeromechanics Union with funding from the U.S. Department of Housing and Urban Development. After failing to draw renters, the complex defaulted on its mortgage and was taken over by KCHA in 1976.

KCHA would have preferred to rebuild the complex, Rosenberg said, but environmental rules would have prevented the agency from building as many apartments on the site. A salmon-bearing stream, Soosette Creek, runs through the property.

To create open space, the agency cleared away half a dozen buildings and partially demolished two others, subtracting 59 units that were replaced elsewhere in the county.

KCHA is conducting an energy-efficiency experiment that involves providing one apartment building with roof-mounted solar panels, dual-flush toilets and triple-pane windows. The agency will track energy and water consumption, and compare it with an identical building to assess the impact of the additional measures.

“This redevelopment is like trading in your 15-mpg clunker for a more sustainable, energy-efficent hybrid,” Constantine said in a statement.