By JERRY VANDERWOOD
AGC of Washington 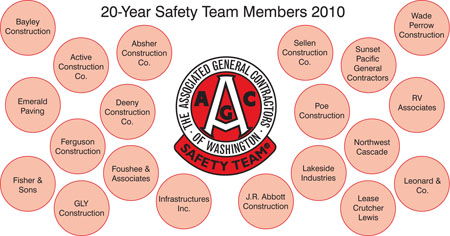 Twenty years ago the construction safety landscape was changing. The Department of Labor and Industries was tenaciously searching for citable jobsite offenses; the specialized position of safety manager was becoming more common in the industry, but relatively few firms had hired one; and a tragic crane accident in 1989 that killed five people in San Francisco put construction safety in the national headlines.

Then, in early 1990, the Washington Supreme Court decided in the infamous Stute case that a general contractor could be held liable for an injury to a subcontractor's employee.

During this period of change AGC-member contractors wondered: If only there was a way to get better organized, to share knowledge and assist companies with their individual needs.

The AGC Safety Committee came up with the solution by creating the AGC Safety Team. The program turned from concept to an actual “team” in 1990, when its first member was qualified. The Safety Team quickly became the high bar that safety-conscious general contractors and subs strove to reach, and to this day it remains a program unique among the 96 AGC chapters across the country.

“The 1980s saw a big increase in the industry's recognition of the value of safety — not just for compliance, but as the right thing to do,” says Mike Sotelo, vice president of W.G. Clark Construction and the chairman of the AGC Safety Committee at the time it established the Safety Team. “We felt the best way to learn was from each other,” he says. “We left competition outside and partnered.”

The Safety Committee worked for six months during 1989 to brainstorm ideas that became the Safety Team concept. Among the many members who participated in its creation were Frank Turman of Sellen Construction, Mark Gauger of GLY Construction, Tim Gottberg, then at Ferguson Construction, and Jerry Carrier, then with E. Kent Halvorson. Also key were AGC's safety staff at the time, Gene Thompson and Jim DeVane.

“The development of the program was a real team effort,” says Sotelo. “It involved not just AGC's leadership and Safety Committee, but the Department of Labor and Industries as well.”

The Safety Committee set the goal of the Safety Team: to promote safe work environments that meet and exceed industry standards. To ensure this high level of performance, the idea was to have AGC's Safety Services staff audit potential Safety Team members' jobsites, written programs and other paperwork. If firms could not meet the high standards — and many initially couldn't — AGC staff helped them improve their safety efforts.

That model remains much the same today, except new criteria have been added throughout the years. Safety Team members must be re-qualified annually, ensuring their programs remain state-of-the-art.

All the planning culminated in a Dec. 8, 1989, press conference at which AGC President Dennis Dickert of Sellen Construction and L&I Director Joe Dear signed a joint resolution kicking off the Safety Team. A year later, 1990 AGC President Pete Paup of Manson Construction accepted the Chapter of the Year award from the AGC of America, in large part due to the success of the Safety Team.

In a progress report to AGC members in 1992, Dear said, “It's a cliché to talk about partnerships between industry and government. But cooperation really works. Safety improvements can be made, money can be saved, morale can be improved, and everyone benefits. AGC and Labor and Industries are showing that.”

One of the early qualified members of the Safety Team was Impero Construction, and Mike Impero's letter to the AGC at that time showed the collaboration that is still a hallmark of the program:

“The Safety Team qualifications easily qualify us for prospective jobs. Another benefit from being a member of AGC and on the Safety Team is the willing assistance from other AGC members. This was demonstrated by the help we received from Herb Heinold of Howard S. Wright, Frank Turman of Sellen Construction and Mike Sotelo of W.G. Clark.”

Two developments over the years caused Safety Team membership to become even more valuable. The first was AGC Group Retro, a workers' compensation retrospective rating program. One of the primary reasons that AGC Group Retro is, year in and year out, a leader in returning money to its participants is the decision made in 1992 to require Safety Team membership as an underwriting criteria for participation in Group Retro.

Flash forward to the present. Foushée and Associates' safety director Stephen Seger says, “AGC Group Retro has the best record and much of that is due to the fact that the Safety Team has prevented accidents from happening, lowering EMRs. That's a significant piece of economic evidence regarding Safety Team's impact.”

Another milestone in Safety Team's evolution is No. 97-2-8, an interim operations memorandum issued in 1995 by the Washington Department of Occupational Safety and Health. An updated, strengthened and permanent memorandum was issued a year later by DOSH, and the upshot is that Safety Team members qualify for focused, rather than comprehensive, jobsite inspections.

“In the past, inspectors had an open field,” says Seger, a longtime member of the AGC Safety Committee. “They could look at written programs and at every detail, and inspections were time-consuming and disruptive. We convinced leaders at L&I, using their own data, that there are specific areas with the highest risk. So in a focused inspection, L&I inspectors look at these four high-hazard areas (falls, electrical, struck-by and caught-in-between) and will look at other areas only if there is cause.

“This does not mean contractors are off the hook, it's just recognition that they have already exceeded minimum safety requirements through Safety Team membership. It's win-win, saving a lot of time for the inspector and the contractor.”

Because of members' demonstrated expertise and commitment to safety, Safety Team has become a respected platform for addressing regulatory matters.

“Safety Team members have had influence with regard to the rule-making process,” says Seger.

Ergonomics, cranes and hearing conservation are among the issues for which Safety Team members have provided critical input as rules have been developed, making them more workable for the industry. And once a rule is finalized, Safety Team works to ensure members are able to comply.

Perhaps the best way to quantify the value of Safety Team over these 20 years is this: Safety Team members on average have experience modification ratings (EMRs) that are 20 percent lower than the industry average. This means safer workplaces and lower workers' comp costs, and these things are increasingly noticed by clients.

“With AGC's help, our safety program lowers our costs and keeps us competitive,” says Don Coovert, safety director for John Korsmo Construction and current chair of the AGC Safety Committee. “Our clients also recognize that our membership in AGC Safety Team is a commitment to our construction community and safe jobsites.”

Jerry VanderWood is director of communications for AGC of Washington.