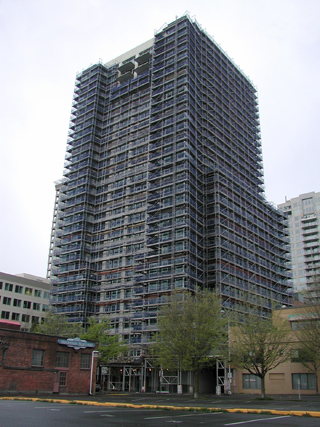 Brian Urback of Bentall Kennedy Associates said workers won't start tearing into the building itself for another two to three weeks.

Urback said crews from Lease Crutcher Lewis and its demolition subcontractor, LVI Services of New York City, will start with the garage, a six-story structure next to the 25-story apartment tower. The garage has five townhouses above the parking.

Urback said the goal is to recycle 95 percent of the concrete. It will take 12 to 16 months to remove the structures and finish site work.

No cost estimates were available for the deconstruction project. Urback said the site would ultimately get another apartment building, but no schedule has been set.

Carpenter's Tower LLC announced last year that it would dismantle the building because of construction defects. It reached an undisclosed settlement with the original contractor, McCarthy Building Companies, last fall.