Owners, designers and contractors are always looking for ways to build smarter and better.

A new method for strengthening concrete shear walls has the potential not only to remove significant quantities of costly reinforcing steel, but also to make construction faster and easier.

This innovative approach — never before used in the U.S. — is being planned in a downtown Seattle high-rise residential tower. Its design is currently under review by Seattle’s Department of Planning and Development, with approval expected later this year.

The concept involves mixing small steel fibers — similar in appearance to hair pins — into concrete, much like early builders used horsehair or straw to strengthen clay blocks. The fiber-reinforced concrete will be used in ‘link’ beams above the doorways and other openings in concrete shear walls.

It will create significant reductions in the reinforcing steel typically placed above these openings, and eliminate the need for costly and time-consuming diagonal bars in many of these beams. Eventually, use of fiber-reinforced concrete throughout the shear walls may create further economies, although additional research and development is necessary to realize this goal. 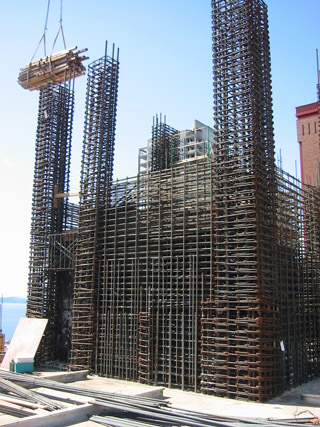 Structural engineers have long searched for better and more efficient ways to strengthen concrete shear walls in high-rise towers. The function of these walls is to provide lateral stability to the building in the event of an earthquake or intense windstorm.

Their strength and stiffness are compromised, however, by the openings created when wall penetrations are made for doorways and mechanical openings. The beams above the openings become highly stressed because of the voids below, requiring placement of additional reinforcing steel in them.

In conventional construction, these shallow link beams are filled not only with horizontal and vertical rebar, but often large diagonal bars extending into the adjacent boundary elements. Threading these bars through existing rebar is difficult and time consuming. Because the link beams are already congested with steel, the time spent placing these diagonal bars — then pouring concrete through the congestion — often slows shear wall construction and negatively impacts the schedule.

By using steel fibers mixed with concrete at the batch plant, the strength of link beams is greatly increased, and a significant quantity of reinforcing steel — including the unwieldy diagonal bars — can be eliminated.

Savings are expected to reach beyond steel. Once builders become familiar with the method, time savings should be realized because of reductions in rebar congestion and complexity.

The use of fiber-reinforced concrete in construction is not new, but its use in building structures is. Fibers — often made of nylon or polypropylene — are often used to control cracking in driveways, patios and sidewalks. Steel fibers are sometimes used in applications such as tunnels and dams where heavy cavitation can be an issue. Their use in building structures, however, has been limited.

University of Michigan researchers have been studying steel fiber-reinforced concrete in seismic applications seriously for more than a decade.

Their studies have shown that the fibers perform as intended and provide structural performance similar and even superior to conventional reinforcing in shear wall link beams. The university’s department of civil and environmental engineering partnered with Cary Kopczynski & Co. to put the concrete to use in the field, and now CKC is helping develop design methodology for use by structural engineers.

Several Seattle buildings currently under design by CKC will likely incorporate steel fiber-reinforced concrete. Construction is expected to begin this year on the first of these, 815 Pine, a 40-story residential tower at Eighth and Pine.

The use of steel fiber in two other towers is also planned. The extent of its use in these buildings will depend, to some degree, on the field experience gained with 815 Pine. If all goes well, the use of steel fiber may be broadened to include the full shear walls at select locations.

CKC embarked with the University of Michigan on intense study of this topic several years ago, intending to incorporate steel fiber into several buildings at the time. The recession put those plans on hold, but also provided time to advance the necessary research and development.

With the market now recovering, the laboratory research and corresponding design methodology are more complete, allowing CKC to proceed with a broader array of data necessary to validate the approach. CKC has applied for the use of steel fiber concrete under the “alternate materials, design and methods of construction process” in the 2009 International Building Code.

While the use of steel fiber-reinforced concrete has so far been studied for use primarily in link beams, University of Michigan researchers are planning to soon provide testing results that support the use of fibers in entire shear walls. Many new possibilities will open up if it is confirmed that using steel fiber more extensively will reap the expected cost savings.

The use of steel fibers at select locations throughout shear walls would reduce rebar quantities and congestion, perhaps significantly, and allow for a reduction in the size of the shear walls themselves, freeing up floor space.

Cary Kopczynski is president and CEO of Cary Kopczynski & Co., a Bellevue-based firm providing structural engineering for major projects throughout the United States and beyond.