Swedish Medical Center is racing to complete its new Issaquah campus, which is slated to wrap up a year earlier than traditional scheduling would allow.

One of the major factors contributing to its success is integrated project delivery, or IPD, a behind-the-scenes approach adopted at the earliest stages of the project. Under IPD, all the project participants begin collaborating before a single spade of soil is turned. The goal is to reduce waste, improve value to the owner and enhance efficiencies in design and construction.

IPD is a form of project delivery that has been catching on throughout the country and the Pacific Northwest. The speed and energy ratings being accomplished at Swedish Issaquah illustrate just how effective the approach can be.

Very aggressive completion and energy-use targets were set. To quickly deliver a state-of-the-art facility that is also one of the 10 most energy-efficient hospitals in the region, it was clear that a novel approach was necessary. So team members were selected, in large part, on their commitment to IPD principles. 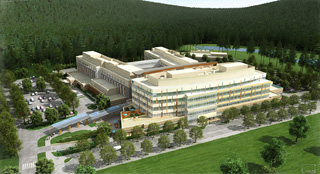 Rendering provided by Studio 216 for CollinsWoerman [enlarge]
The first phase of the Swedish Issaquah campus — a medical-office building and outpatient center — opens in July. The second phase, a hospital, opens in November.

In big-picture terms, IPD meant that the team designed “backwards,” with the end goal in mind. In the case of Swedish Issaquah, they asked a number of tough questions: What will each system cost? How will these systems perform? How will they get built and be integrated into the building? Will the system be flexible enough to changes in the owner’s needs over time?

With answers in hand, the team wrote its road map. With an aggressive energy mandate and seemingly impossible deadline, the team developed a sophisticated decision matrix. A detailed energy model meant that decisions could be tested before they became cast in concrete.

To achieve the top-10 energy-efficiency goal, for instance, Swedish Issaquah’s team needed to hit an energy-use index of 150. This required that all systems be fully integrated, with all heat reclaimed and controls tightly optimized.

Modeling showed that a traditional constant-volume system for air flow would not meet the aggressive goals. So instead the team selected a variable air-volume system that would throttle down when demand lowered.

Similarly, modeling demonstrated how innovative heat-recovery chillers and low-temperature boilers would grab every bit of waste heat. Since the entire team was part of the decision-making process, this technology was discussed, modeled and well understood before final selection.

How did the IPD process work in practice? A weekly team meeting included the owner’s representative and project manager, other Swedish representatives, the general contractor (Sellen), mechanical engineer (CDi Engineers), mechanical contractor (University Mechanical Contractors) and others. Team members used their time together to create a matrix of design elements and decide who would lead, contribute and follow on each item.

Also during the meeting another design component was selected and vetted. The contractor looked at costs and constructability issues. The facility manager considered whether the component or system provided the right level of controls: Would it be easy to maintain and provide desired flexibility? At the end of the process would all elements be understood by stakeholders?

The mantras at the meetings were: no surprises, no change orders, and achieve the full value of the Puget Sound Energy rebates.

What did the owner’s rep bring to this nexus of ideas, critique and input?

Dan Coxall, a senior project executive at Hammes Co. health care consulting and facility developer for Swedish Issaquah, was responsible for explaining how the hospital and its various departments operate and where synergies might exist. He was accountable for room use, expected load demands and setting priorities. He set up user-group meetings to find efficiencies within use patterns.

These meetings helped establish user buy-in early on and sustain it throughout the project. In short, he was instrumental in helping the hospital to understand how resources were being efficiently allocated, moving stakeholders away from a one-size-fits-all mentality.

The IPD approach uncovered interesting factors. Take, for example, energy modeling for the building skin. With the hospital’s particular use pattern, the skin would have less than 1 percent impact on overall energy consumption. Microconditions still dictated solar shading and control, but knowing how the building envelope performed in the model helped focus the team on larger potential energy savings found elsewhere.

Coxall says that IPD has been instrumental in the project’s success.

“Being driven by cost and sustainability, IPD makes a lot of sense in today’s environment,” he says.

“It’s not a passing design delivery fad, but rather a results-driven change in how we do business. Speed to market is critical. So we can no longer rely on the traditional processes, which operates at a snail’s pace.”

Indeed, while speed to market is an enormous drive for any project, medical facilities in particular stand to gain the most from the combination of speed and quality.

The IPD process shaved a year off the construction process for Swedish, which not only resulted in a savings of millions of dollars in construction overhead, but possibly even more beneficial, allowed a year’s worth of surgeries and critical patient care and the income derived from it. It’s a win-win scenario, which is why the IPD design approach to health care facilities has caught on in a big way.

Having used IPD on several projects, Coxall is a wholehearted believer.

“We can’t afford designers working in a vacuum, then having contractors say the design is unbuildable, or will take forever in procurement.

“Instead, getting design and construction groups into the same room at the beginning of a job saves money and eliminates finger-pointing at the end. Any second-guessing occurs with everyone listening in a collaborative environment. Teams aligned by a common purpose and a bond of trust are the only way to go.”

Eric Anderson comes to CDi Engineers with a background in sustainable architecture and interior design. CDi Engineers is a national leader in mechanical engineering, with a focus on health care and institutional projects that have a strong sustainable component to them.