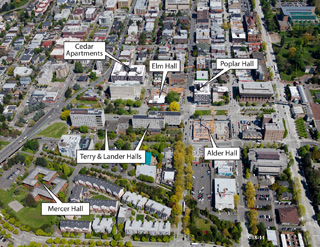 Photo courtesy of W.G. Clark Construction [enlarge]
Cedar Apartments will be the first of several housing projects to open on west campus. Cedar is expected to be finished in July and Poplar Hall will be finished in August.

Contractors are expected to finish the first two new student housing projects on the University of Washington's west campus this summer, part of the school's plan to add 3,000 student beds in five years.

Clark project manager Molly Mahan said they started Elm in January and are now beginning to frame it. Elm has two levels of post-tensioned concrete slabs topped by five levels of wood-frame construction. The L-shaped building has an elm tree in its crook. Mahan said special precautions have been taken to protect the tree, including having an arborist on site any time equipment gets near the tree protection zone.

Elm Hall should top out late this summer and be finished in July of 2012, Mahan said.

Gilson said they started the Alder project in January and will be wrapping up two lower post-tensioned concrete levels in mid-July so crews can begin five levels of wood-frame construction. The building is expected to be finished in July 2012.

“It's fun to see the neighborhood growing like it is,” Gilson said. “It's a great improvement.”

About 1,650 units will be built in the first phase, which was designed by Mahlum. All four buildings are on schedule and within budget.

The UW earlier this year revised the second phase of its west campus housing. It still involves replacing Mercer Hall but now includes replacing Lander Hall and possibly turning a small parking lot near Condon Hall into housing. Lander was originally planned as part of a third phase.

The second phase also involves renovating Terry Hall and constructing new housing halls next to Terry and between Terry and the new Lander.

UW project manager Troy Stahlecker said a decision is on hold on whether to move forward with the Terry renovation and two new adjacent buildings.

The total budget for phase two is $257 million.

Clark is the gc/cm for the new Mercer Hall, which will have 930 beds in one building. Mahan described the building as having a spine along the Burke-Gilman Trail and four fingers extending down the hill toward the water. Clark opened demolition bids earlier this month and is posting other bid packages for the project.

The new Mercer was designed by Ankrom Moisan Architects, which has a Seattle office, and Feilden Clegg Bradley Studios of London.

Paul Brown, senior consultant with the UW's Capital Projects Office, said construction at the Mercer site should start in August and be finished in July 2013. The entire budget for Mercer is $118 million.

The new 200,000-square-foot Lander is being designed by Mithun and will be built by Walsh. It will have 570 beds in five floors of wood-frame construction above two post-tensioned concrete decks. The lower two floors will serve as the central hub for student residents west of 15th Avenue, with kitchen and dining operations plus a central mail facility.

The entire budget for Lander is $77 million. Construction would start in July 2012 and finish in August 2014.

Brown said details about housing near Condon Hall haven't been worked out, but there could be 250 to 450 beds. It wouldn't be finished until at least 2015.