A renovation that also keeps the past alive

History was a key player in the University of Washington’s Husky Union Building renovation and expansion project from the start.

Signs of the past were everywhere: windows, Gothic arches from 1949, a well-used bowling alley, and black-and-white photographs of student gatherings at the HUB.

Our construction team’s task was to give the building new life. The project was also a collaborative effort with the design team and the UW to find creative ways to preserve the building’s history.

Our team took this mission to heart and took pride in constructing a building that recognized the past while serving the ever-changing needs of the students. The design covered many of these facets, but the execution continually challenged the construction team.

Bracing for a face-lift

To begin with, the main entrance needed a face-lift. The goal was to preserve the original entry as a nod to the past and to surrounding campus buildings. 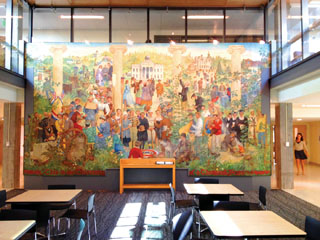 Photo courtesy of Skanska [enlarge]
A decades-old HUB mural by artist Ernest Norling was stored in a weatherproof container during the project.

Bracing obviously needed to support the wall, but the work needed to be executed so that it didn’t harm the appearance of the facade or impede the ability of work to progress around it. This was especially critical for the structural steel work.

New energy-efficient windows that matched the appearance of the original windows were also added. Our team did a remarkable job preserving the exterior facade while incorporating modern features and design elements.

Maintaining the original facade was not the only effort we made to preserve the past. Inside, our team took great care to preserve a 1950s mural painted by artist Ernest Norling.

Skanska detached the mural from its existing mount and stored the artwork in a weatherproof, humidity- and temperature-controlled container. This was needed to protect the mural from dust, water and other construction hazards. The container was built on wheels so the mural and its protective cover could be moved around as construction needs warranted.

The mural remained even as the building around it was transformed. Although significant demolition activities occurred around and above the mural — for a time there was no roof over it — our system made sure the mural got through the project unharmed.

Travertine panels from the first floor interior were removed so they could be repurposed in the new building. The panels, which had been attached to the walls with copper coils and plaster, were not meant to be removed.

The construction team had to cut them off one by one, starting from the top. From there, they needed to be taken to a stone fabrication facility to have their existing polish removed and then to be cut into smaller pieces.

Now they have been reinstalled throughout the first floor and basement feature walls. In fact, in one area, they serve as a key part of a display of photos showing how the building has evolved over time.

Preserving these panels not only offered a bit of history to alumni, but was also an efficient use of existing materials. The parts of the travertine panels that couldn’t be used on the walls was utilized as part of the terrazzo flooring mix that is used in many parts of the new building.

Not for weekend warriors

To preserve the bowling alley’s history, the designers had a more whimsical plan. Our construction team installed new, synthetic wood lanes — a much-needed upgrade — but salvaged the original wood planks. We then reused the wood throughout the bowling alley. The shoe-rental counter, for instance, is decked with the original wood, and the benches constructed from planks.

Once again, the design required careful execution and extraction of the existing wood. To prepare the wood for new use, carpenters had to contend with countless nails and spikes that helped keep the strips of maple together to make bowling lanes.

It’s the kind of carpentry work weekend warriors and hobbyists would stay away from, but for our project it was a tough task that had to be handled. The end result fulfills the vision of the design plan, making every bit of work worth it.

One part of the building couldn’t be changed at all: the lower floor’s food-service area. This dining facility had been renovated within the last decade and the UW did not want to redo the space.

The construction team was tasked with protecting it from the elements throughout demolition and construction. One key step was installing a roofing system, including drains and gutters, on the building’s first floor to keep rain out of the dining area while it would have been otherwise exposed. This, too, came with challenges, but the end result is a preserved food-service center.

The HUB project was a great example of teamwork. Our team saw beyond day-to-day demolition and construction and maintained respect for the building’s history. In collaboration with the client and design team, we were able to build a unique project that will serve the needs of alumni and students for years to come.

Don Kowalchuk, vice president of operations, started his career with Skanska 21 years ago. He is overseeing the construction of the Husky Union Building project.