At its Jan. 25 annual meeting, the AGC of Washington elected its 2013 slate of officers and board members. The officers are:

Butch Brooks is owner of Brooks Construction Management, which specializes in construction management, pre-construction and value-engineering consulting. Brooks has worked for two AGC contractors, including 26 years at Woodworth and Co., where he joined as project manager and became president in 2009. He has served in a variety of capacities for the AGC of Washington, including the board of trustees, chairing the government affairs council, and participating for nearly two decades on labor committees and trust funds. In 2005, he was AGC of Washington’s Contractor of the Year. Brooks is a past president of the Washington Asphalt Pavement Association, was on the Fife City Council (including a year as the Mayor pro-tem), and is on the Pierce County Regional Council. After coaching a girl’s fast-pitch softball team for eight years, Brooks spends his spare time golfing and fishing. He and his wife, Barb, have two daughters, Sarah and Becky.

Joseph Simmons is president of Joseph S. Simmons Construction, a general contractor working throughout Western Washington. After graduating in 1976 from the University of Washington’s construction management program, he worked for three AGC contractors as an estimator and project manager. He started Joseph S. Simmons Construction in 1985, and also owns C/I Properties, which owns and manages commercial properties throughout King County. He has been an active member in the AGC since 1976. He lives in north Seattle with his wife, Susan.

Gary Smith is president of Lease Crutcher Lewis. A 35-year construction professional, he has been with Lewis since 1995 and prior to that spent 20 years with Wright Schuchart. Smith is property committee chair and board member for the AGC of Washington, and serves on the boards of the Northwest Construction Consumer Council, Seattle Aquarium and Green Schoolhouse Series. In 2012, he was AGC of Washington’s Contractor of the Year. He is a graduate of the UW construction management program. Smith and his wife, Ann, live on Capitol Hill and enjoy boating.

Mark Seaman is the CFO and secretary/treasurer of Abbott Construction, a general contractor with offices in Seattle, Arcadia, Calif., and Lake Oswego, Ore. After graduating with a bachelor’s degree in economics from UC Berkeley in 1977, he worked in the San Francisco area for 20 years in real estate finance, construction and asset management. He moved to Seattle in 1996 and was a controller at McDonald Miller before landing at J.R. Abbott Construction in 1998 as CFO. Seaman and six other principals bought J.R. Abbott Construction in 2006. He is an active member of the AGC of Washington and Construction Financial Management Association. He lives in Bellevue with his wife, Cindy.

Steve Isenhart is co-owner, estimator and project manager for Tiger Construction, where he started the building division in 1985. He holds a bachelor’s degree in geophysical engineering from the Colorado School of Mines. He is an active AGC member, both as a board member and as a leader of AGC’s Northern District. Isenhart is a retired volunteer fireman and EMT who served 20 years at Kendall Fire Station; for 10 years he was a commissioner for Whatcom County Fire District 14. He is married to Sharon Isenhart and has two children. His interests include biking, boating, fishing, golfing, hiking and skiing.

The board members are: 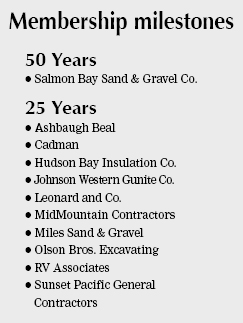