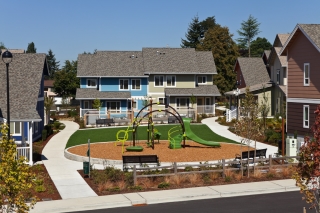 The community was redeveloped to serve a broader mix of income levels, while replacing federally subsidized units for low-income households. All previous tenants who were in good standing were given the option of returning.

Seola Gardens received a 2013 Green Hammer award from the Master Builders Association of King and Snohomish Counties for its environmentally sustainable design, construction and operations.

KCHA used rain gardens and a pond that cleans surface water before it leaves the site. All rental units take advantage of natural light, are energy-efficient and are wired for solar power.

Seola Gardens' redevelopment, in tandem with its sister property Greenbridge, is part of KCHA's strategy to revitalize White Center, one of the poorest areas of King County. The redevelopment of the two sites is creating homeownership opportunities for 480 families, significantly altering the neighborhood income mix and generating about $2.03 million annually in property taxes.

KCHA has invested about $300 million in private and public funds over the past 10 years to build housing and expand community services in the two neighborhoods.