The Polyclinic seized the its opportunity with a new plastic surgery center in Nordstrom Tower in Seattle’s First Hill neighborhood.

The team charged into the process on Sept. 15 last year and had to have the new clinic ready for the physicians by Jan. 2. They would be operating in a fully licensed and certified ambulatory surgery center by February 2014 — less than 5 months from the start of the process. 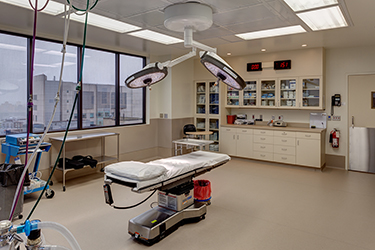 The brief period included design, city permitting, state Department of Heath reviews and approvals, and state licensing and construction. All parties involved were required to have had experience in both ambulatory surgical centers and complex remodeling projects.

The16th-floor location of the project added extra levels of complexity.

Initial test-to-fit plans were produced earlier in the year but the actual design work began in mid-September.

Clark/Kjos started the process by setting up a “pull schedule,” which utilized the contractor’s preferred lean process. This helped to identify the latest possible date when a decision could be made so that sufficient time could be allowed for documentation, production and installation. 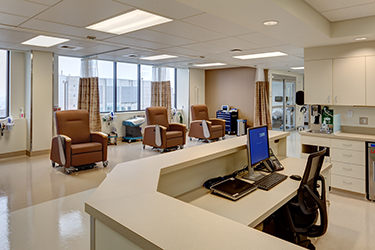 [enlarge]
The center's 7,000-square-foot size meant designers had limited space to work with.

Limited space was another lean challenge. The center was just 7,000 square feet, an unheard of footprint when considering that there would be four 400-square-foot operating rooms, sterile processing, pre- and post-operation spaces, and staff areas.

The project demanded that the owners, construction and design teams collaborate closely throughout the process.

The surgeons held weekly meetings with the director of facilities, Randal Brand, and with the design team leader, Dale Anderson. Randal made it clear that the project’s pace would require that decisions must be made to meet schedule, so decisions would be made whether a stakeholder was present or not. There was no need to backtrack on or delay a decision — physicians and clinical staff were present available whenever needed.

The early inclusion of the code authorities in every step of the process proved essential to staying on schedule. The city Department of Planning and Development and the state Department of Health’s Construction Review Services departments maintained a collaborative approach throughout the process.

They were brought into the process at the appropriate times to review, advise and approve. The DPD and CRS understood the urgency for the completion of the project and were fully collaborative in their response. Their early input eliminated potential late changes and their speedy approvals were invaluable to the successful conclusion of the project.

Help from the contractor

General contractor Sellen Construction, along with design-build MEP of H&M Electric and MacDonald-Miller, partnered in the design. Their close coordination included casework, careful demolition to retain key elements, and reuse of existing doors.

The project required a new rooftop mechanical system built from off-the-shelf components to meet the rigid schedule. Casework shop drawings by Pacific Cabinets served a dual purpose as construction documents and shop drawings — they were produced from design development sketches.

The mechanical package unit was raised to the roof the weekend before Christmas, which necessitated the closing of a street and use of the tallest movable crane available. An emergency generator was installed at the building’s street-level loading dock.

Finally, coordination of the trades by the Sellen team was admirable. Like a well-coordinated dance routine, each one moved through the spaces in its turn reaching a “crescendo” as well as the desired completion dates.

Most importantly, though, was the fact that in spite of this compressed timeline the design was not compromised. The plastic surgeons said their practice requires a highly efficient process with minimal steps and standardized procedures. They also asked for a clinic that would reflect the aesthetics of their practice.

The comments from patients, physicians and staff in the completed spaces have been very complimentary of the way the facility functions and feels.

The team accomplished a faster, better and less expensive process for The Polyclinic, meeting a seemingly unrealistic schedule and the need for an enhanced lean design at an effective cost.

R. David Frum is a principal with Clark/Kjos Architects, a firm specializing in design for health care, with offices in Seattle and Portland.