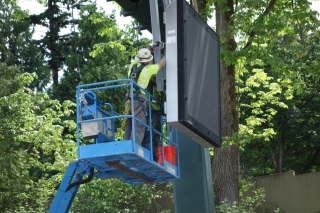 Photo courtesy of DBE Electric [enlarge]
DBE Electric is working on the 520 floating bridge project as a disadvantaged business enterprise.

Construction companies owed by Caucasian women could lose their standing as disadvantaged business enterprises with the Washington State Department of Transportation if a waiver request is approved by the federal government.

The waiver, submitted in late March, resulted from a WSDOT disparity study that showed the agency's contractors hired enough women business enterprises to meet goals that were set to overcome past discrimination against women.

WSDOT is required to do disparity studies every three years to see if it is meeting its DBE goals and if the goals need to be changed. The agency commissioned the study from BBC Research & Consulting in Denver.

The waiver request is now in the hands of the Federal Highway Administration.

“We could have an answer as soon as the end of September, but I know of other states that have not heard about waiver requests for as long as a year,” said Brenda Nnambi, director of the WSDOT Office of Equal Opportunity. “Until we hear, the set-aside percent for women-owned businesses will remain the same.”

Mary Guthmiller, owner of DBE Electric in Auburn, said the change would destroy women-owned businesses. “We would not get business from prime contractors on these projects without these programs.”

She is fighting WSDOT's waiver request and has formed a group of transportation contractors called Women in Highway Construction.

“We have met with an attorney and if the waiver is approved, we will file an injunction against it the next day,” Guthmiller said. “We feel we have no choice.”

Her firm is completing electrical work on the 520 floating bridge project.

The group plans to challenge the study's statistical analysis. Opponents of the waiver argue the study was skewed and did not follow protocol mandated by the FHWA.

To determine if DBE goals are met, BBC polled the local construction community to see how many women- or minority-owned companies were available for WSDOT work. BBC then looked at the dollars that should be allocated to DBEs and arrived at the percentage that should be allotted to each group.

The study found that only 1.8 percent of construction companies are owned by women, greatly reducing the dollar amount they must receive to meet federal requirements.

“In other states the number of women-owned businesses is in the double digits,” said Tina Scoccolo, president of Terra Dynamics, a Tacoma-based landscaping firm. “We feel that the way the consultant arrived at the 1.8 percent figure is incorrect because of the way it gathered the data.”

Terra Dynamics is doing landscaping work along 520 and also has a contract for work on the viaduct replacement project.

“The fact is that once the opportunity for us to receive projects as a condition of award for the general contractor has been lost, it is very difficult to get it back,” said Guthmiller.