Before I left for Haiti in 2010 an acquaintance said to me, “You are wasting your time going to Haiti. The corruption is so widespread and the poverty there provides so little opportunity, your efforts won’t make a difference.”

Improving the lives of the people in Haiti is certainly a challenging mission. Less than 25 percent of the children attend secondary school, and the majority who do never graduate. Only a small percentage of those enter college.

As many throughout the world can attest, it is not easy to break free from the grip of poverty. And nowhere in the Western hemisphere is that more apparent than it is in Haiti.

Haiti is the poorest and least literate country in all of the Americas. That was true before Jan. 12, 2010, the day of the devastating magnitude-7.0 earthquake, and it is true today.

The earthquake was one of the most disastrous ever in terms of loss of life and property damage. Assessments of the death toll vary widely, but the United Nations estimates that over 200,000 people died and over 1.5 million were left homeless. More than 4,000 schools were destroyed. In response, numerous aid organizations set up temporary schools in tents and minimal structures, many of which are still in use today. 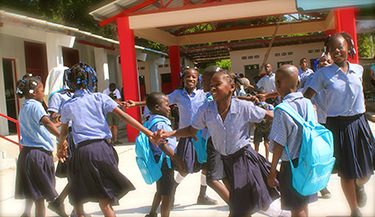 Photo by Dennis Erwood [enlarge]
Students in Leogane, Haiti, at their new school, built in 2012 to replace a damaged structure.

Schools for the Children of the World (SCW) partnered with the Council of Educational Facility Planners International (CEFPI) to create the CEFPI/SCW Haiti Schools Initiative, a relief effort to build 10 schools in the area around Leogane, near the quake’s epicenter. Architects and engineers from throughout the United States and Canada made several trips to Haiti in 2010 to document the conditions and meet with educators and school officials. When they returned, they provided pro bono design services and prepared construction drawings for new schools.

Studio Meng Strazzara was one of the many firms involved with the relief effort. We designed and prepared construction drawings for the primary school Ecole Nationale de Guerin in Leogane.

Construction was completed this summer and classes will start this fall. The new school accommodates 300 students in seven classrooms, and includes a large multipurpose room with a kitchen.

It was designed with electrical power and lighting, and future data capabilities. But unlike schools here in the Pacific Northwest, it needs to be able to function without any operating utilities. There is a well on site with a hand pump, which will be supported by an electric pump when power is available.

Sanitation was a problem at this school and many others, both before and after the quake. To improve conditions, rainwater will be collected from the schools’ roofs for hand washing, and composting latrines are providing needed improvements to the previous pit toilets.

The buildings’ floors are raised above the ground for protection against flooding during the hurricane season. All of the new construction is designed to resist earthquakes and hurricanes in accordance with the International Building Code. All buildings have also been designed to be accessible, which is particularly important in light of the many disabling injuries suffered by the people there due to the quake.

Initially, the Spanish Red Cross intended to provide construction funding and project management for nine of the schools, with one of the schools funded by the Holy Cross Order of the Catholic Church. Unfortunately the financial crisis in Spain impacted the projects’ schedules and the amount of funds available.

Modifications were made and additional partners were brought on board. The German Red Cross and Fonds d’Assistance Economique et Sociale, with financial support from the German Development Bank, provided construction funding and project management for two of the schools.

The projects were bid by Haitian contractors who employ local workers.

The construction practices used on these schools are quite different from what the laborers are used to, as there are traditionally no building codes, material standards, testing or jurisdictional inspections of the work. So outside experts are on hand to ensure proper practices are followed and the projects stay on budget.

Although the funding and construction process has not been as quick as originally planned, progress has been made — five of the schools have been completed, and the remaining five are under construction. SCW has also established a permanent presence in Haiti and has completed three additional schools in other areas of the country.

Altogether these schools serve more than 7,600 students. And it doesn’t stop there. Additional school projects are in the works for 2015.

In spite of the numerous challenges in Haiti, considerable progress is being made due to efforts by SCW and the many other organizations working there. According to the United Nations, primary school enrollment has increased from less than 50 percent in 2006 to 77 percent in 2012. With more new schools opening, those numbers will only get better.

The Haitian people will continue to struggle for years to come, but increasing the education opportunities for new generations of students will provide them the best chance to overcome the obstacles that lie ahead.