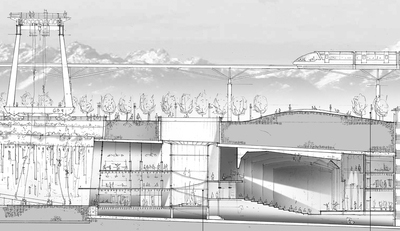 [enlarge]
The sign went up yesterday. The contact is listed as B.K. Landes, the tunnel machine’s namesake and former Seattle mayor.

What would happen if Bertha, the tunnel boring machine that's stuck along the Seattle waterfront, can't get going again?

Some wag came up with a plan and posted it — master-use-permit style — on a board in Occidental Mall.

The “Notice of Proposed Land Use Action” sign appeared yesterday mounted on a 20-foot board next to The London Plane restaurant. It says “the citizens of Seattle are conducting a feasibility review” about a project called Born Again Bertha.

The board shows a detailed diagram of how the tunnel could be reused. You can check it out online at http://www.bornagainbertha.com.

The idea is to change the use of Bertha's launch pit, rescue pit and the 1,000-foot-long tunnel. Here's what the new uses are: a waterfront community center that contains a “K-8 advanced arts and sciences school” named after former Seattle Mayor Mike McGinn; 200-seat performing arts theater; a gym; natatorium; skate park; and a performance venue and community hall.

The community hall would be built inside Bertha's rescue pit, with a glass roof. The machine's massive cutterhead would sit behind the stage as a backdrop.

How would you get down there? In a Bubbleator, of course. (For all you new arrivals, that was an elevator built for the 1962 World's Fair at Seattle Center).

Twelve tennis courts would go inside Bertha's launch pit, built on terraces rising up to the surface. Launch pit walls would make the perfect backstop for errant balls, the proposal says. 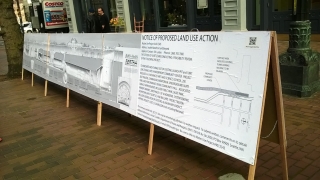 The launch pit would also contain the elementary school and a playground with boulders and rock-climbing walls.

How about the giant red gantry crane brought in to lift Bertha up for repairs? That would be make an incredible — and “intensive” — ropes course.

The middle school would be inside the tunnel, which would also house the theater, sports center, and a skate park that starts at the surface and enters the tunnel via an “accelerator chute.”

An underground portion of the skate park would weave through Bertha's leftover skeleton, and end at a snack bar made from the remains of the tunnel workers' kitchen.

Boarders can start the course all over again by riding the conveyor belt that carried dirt out of the tunnel.

Other surface improvements would include a new park, farmers market and a monorail system serving downtown, West Seattle and Ballard. Also, the viaduct would be demolished.

The cost? Just $134 million — not including the monorail.

Comments can be submitted until April Fools Day, though the board says the comment period “may be extended ad infinitum by written request.”

The contact person is listed as B.K. Landes, the tunnel machine's namesake and former Seattle mayor. The phone number listed is for the Washington State Department of Transportation.

A woman who answered the phone at London Plane said the board went up about 7 a.m. Tuesday, but she said the restaurant wasn't involved with it.