By MIKE BRENNAN
City of Bellevue

The tower cranes have returned to the skyline, and there is a lot going on in and around downtown Bellevue these days — with much more to come.

Take, for instance, the state’s largest continuous concrete pour recently at the Lincoln Square expansion involving 81 trucks running nonstop for 24 hours. Or the new Marriott Hotel south of City Hall that is nearing completion. Or several major residential buildings that continue to climb upwards, further altering Bellevue’s skyline — just as the park corridor from downtown to Meydenbauer Bay alters the streetscape. And it’s all according to plan.

Bellevue is constantly looking decades ahead to define how we want to grow. Two important planning processes that encapsulate the City Council’s and the community’s vision — the latest comprehensive plan update and the Downtown Livability Initiative — are well underway but will include even more feedback from the public before they are approved by council. Both will guide the city’s approach to downtown growth and development for the next 20 years.

Projects that were just discussions two years ago are under construction. Many important pieces are coming together nicely to make Bellevue the place where you want to be: 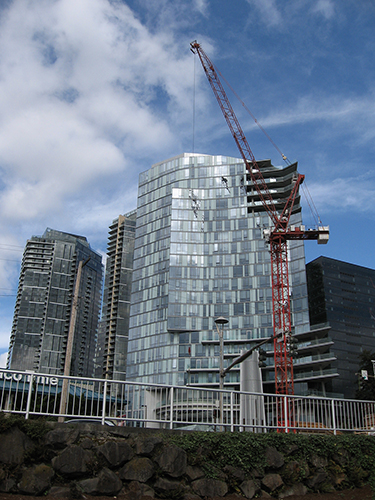 Photo from the city of Bellevue [enlarge]
The second phase of SOMA Towers is underway at 106th Avenue Northeast and Northeast Second Street. It will have 127 residential units and three levels of retail.

• Retail destination. Bellevue’s reputation as a center for shopping and entertainment is being enhanced by new construction and changes around Bellevue Square.

An upscale grocer will occupy about 30,500 square feet of the old J.C. Penney space. Across the street, the Lincoln Square expansion adds retail, cinemas, restaurants, hotel rooms, apartments and offices to an already bustling neighborhood.

An established 24-hour restaurant, 13 Coins, is making its first foray into the Eastside.

And fans of Old Bellevue will be excited to see many new restaurants and other entertainment and retail options being added to that neighborhood; there are three active mixed-use projects within a three-block radius.

• A growing and active downtown. All over town we are seeing more residential. The cranes are working hard to stay out of each other’s way as everyone moves their projects through to completion. More than 750 residential units will be added in the not-too-distant future in Old Bellevue. With one more residential project under construction adding 260 apartment units just one block to the east of Bellevue Way on Main Street, there will be no shortage of living space in the heart of downtown.

The second phase of SOMA Towers, a residential high-rise at 106th Avenue Northeast and Northeast Second Street, is under construction. This project will add 127 residential units and three levels of retail, including restaurant space, in the City Center South neighborhood.

On the north side of downtown there has been significant growth as well, within the City Center North neighborhood. The 19-story Nine Two Nine office building will add a substantial amount of office space in what has been known as the Wasatch Super Block. Bringing additional energy is a project under review called Washington Square Hilton Garden Inn that would add 250 hotel rooms.

We have strong expectations for further growth in the City Center North neighborhood.

• 900-acre Bel-Red District. Development just outside of downtown is also moving along quickly, including the emergence of the new mixed-use Spring District neighborhood. The Spring District will eventually be home to about 3,000 residents, 200 retail workers and 18,000 office workers.

Also, 450 apartment units, including 36,000 square feet of affordable housing, are soon to be completed on the east side of the Bel-Red District.

East Link was a key foundation piece used in planning and redefining the future of the Bel-Red District and will be the catalyst for new transit-oriented development in that part of the city. It will also provide rider service downtown with a station across the street from Bellevue Transit Center.

• Supporting links. Parks, roads and utilities are required to make the city livable, especially as it grows and becomes denser.

We are reviewing those needs through the Downtown Livability Initiative, looking for ways to work with developers to create a downtown that is consistent with Bellevue’s moniker, “City in a Park.” Current efforts include completing the last quarter of the circular promenade at Downtown Park, and expanding the playground.

The city is in the initial stages of construction to create Meydenbauer Bay Park, which will provide a link to the waterfront from downtown.

The conversations continue about other office and residential buildings that developers are looking to start. We anticipate ongoing discussions with the development community and downtown residents as these projects unfold in the next few years.

Like the rest of the region and country, Bellevue struggled through the recession, but that has changed. It’s wonderful to see so much happening after those challenging years.

Looking ahead, we are not anticipating the rapid decline we experienced with the last cycle. Investment and development interests are at a high level with no signs of a sudden fall off.

Mike Brennan is the city of Bellevue’s director of development services.