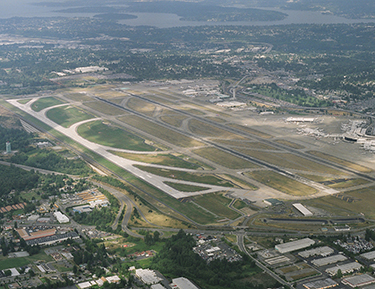 Photo by Sky-Pix [enlarge]
This photo of Sea-Tac’s runways was taken in 2008, shortly after the construction of the third runway, shown here on the left. The runway on the right was reconstructed in 2009.

Crews from Scarsella Brothers and Acme Concrete Paving are set to begin rebuilding the center runway at Seattle-Tacoma International Airport.

The companies are doing the work as a joint venture under a $51.8 million contract for the Port of Seattle.

The runway is scheduled to closed from May 4 to Oct. 30.

Crews will also install new LED runway lighting and an electronic system for detecting foreign objects and debris. Portions of connecting taxiways will also be replaced or repaired, along with electrical, water and stormwater infrastructure.

The total cost to replace the 46-year-old runway is expected be $95 million.

The port received $15 million in grants from the Federal Aviation Administration, and expects to get another $10 million from the agency. The rest will come from airport development funds, airport improvement grants and future revenue bonds.

Once the work is finished, all three of Sea-Tac's runways will have been built or rebuilt within the last seven years.

The reconstructed center runway will be 9,426 feet long and should last 40 years.

The work is not expected to affect flight schedules, passenger traffic or other airport operations. Aircraft will use Sea-Tac's two other runways during construction.

Here are a few more facts about the center runway:

• Concrete from the runway will be crushed on site to make gravel for the new runway's sub-base. More than 300,000 square yards of recycled concrete will used for the project.

• More than 200,000 square yards of new concrete will be poured for the new runway.

• The new runway will have 8 inches of crushed rock sub-base, 4 inches of asphalt and 18 inches of Portland cement concrete.

• More than 16,000 linear feet of new storm drain pipe will be installed.