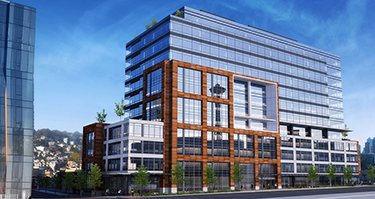 Alexandria Real Estate Equities has started construction on an 11-story biotech building in South Lake Union that will be Juno Therapeutics' future headquarters.

The building at 400 Dexter Ave. N. will have 287,000 square feet of space, and Juno will occupy about 90,000 square feet. Juno will lease the top four floors and has an option on three more.

An April filing with the U.S. Securities and Exchange Commission said the lease is expected to begin around Feb. 1, 2017. It is for seven years, with three five-year options to extend.

The filing says Juno will pay $48 per square foot in monthly base rent the first year, with annual increases of 2.5 percent.

CollinsWoerman is the architect, and BNBuilders is the general contractor. Other team members are KPFF Consulting Engineers, Weisman Design Group and Hart Crowser.

Alexandria and Juno held a groundbreaking ceremony for the project Tuesday that was attended by state and local officials. At the event, Chris Rivera of the Washington Biotechnology & Biomedical Association said Seattle is becoming a hot spot for cancer research and cloud computing. Many of the region's biotech companies are growing rapidly, other biotech companies are establishing offices here, and there is very little new lab space.

Investments, mergers, initial public offerings and other local life sciences transactions are on the rise. Rivera said those transactions totaled about $750 million in 2013, $1.6 billion in 2014 and already more than $1 billion this year.

Alexandria is based in Pasadena, California and has more than 30 million square feet of U.S. property and development projects.

In Seattle, Alexandria has about 746,000-square-feet in the Lake Union area, according to its website.