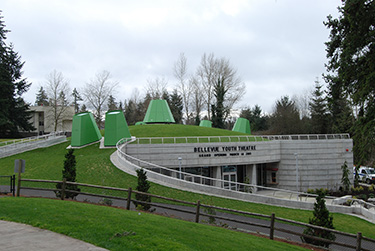 [enlarge]
The 12,000-square-foot structure is built into a hillside at Crossroads Park, and the lawn rolls up onto the roof. 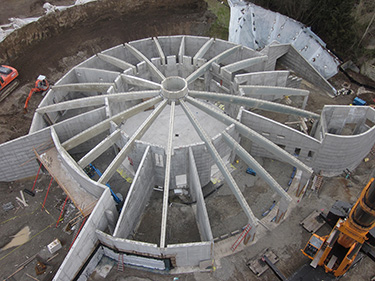 [enlarge]
Tolerances were less than an eighth of an inch between the arched beams and the ring they support.

Actors with Bellevue Youth Theatre are performing “Aladdin” this summer, and you can bet an equal amount of magic went into building the group's new home at Crossroads Park in Bellevue.

The theater-in-the-round has 150 seats, a box office and concession booth, dressing rooms, rehearsal space, offices, a classroom, storage and an outdoor amphitheater that seats 400. It opened in March and cost $8.8 million to construct.

Pease Construction built the 12,000-square-foot structure into a hillside, and the park's lawn rolls up onto the theater's roof.

Becker Architects designed the round building with precast concrete roof beams supported by a precast center compression ring — a configuration similar to what held the Kingdome together before it was imploded in 2000.

Pease project manager and estimator Jason Sousie compared beam and compression ring installation to a Chinese finger trap. Tolerances were less than an eighth of an inch between the seven arched beams and the ring they support. Another five beams connect to the ring, but don't support it.

Setting the beams was tricky. Since the roof is curved, the crane operator had to hold beams at a 15-degree angle to align them with their final resting places, Sousie said.

Pease scheduled an entire day to set the ring, but it only took about an hour.

“It was hard but everyone did their due diligence,” Sousie said. “It fit with minimal persuasion.”

Space between the arched roof beams was filled by 204 hollow core concrete planks made in Spokane by Central Premix, which is part of Oldcastle Materials. Beams range in length from 27 to 57 feet.

Exterior walls and the rest of the building were made with cast-in-place concrete.

Sousie said just one of the 204 planks was out of tolerance, which was remarkable because they were cast in different shapes and sizes to fit between the arched beams. The planks also had to be trucked in sequentially because there was limited set-down space. 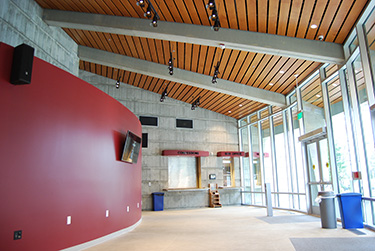 [enlarge]
The theater-in-the-round has 150 seats, a box office and concession booth, dressing rooms, rehearsal space, offices, a classroom, storage and an outdoor amphitheater that seats 400.

Crews installed neoprene bearing strips to seal spaces between the beams and planks, and later filled the spaces with grout.

The roof was covered with a 3-inch concrete topping slab, and 18 inches of light-weight soil and grass.

Light comes in through six sculptural “trumpets” on the roof. Three of the trumpets also release mechanical and plumbing exhaust, and the other three have air supply ducts.

Is Sousie concerned about leaks? Not at all. He said the roof membrane has a leak detection system designed by Wetherholt and Associates. The system will send a text message to a mobile phone if there's a leak, and include the location — within one foot.

The green roof is one element that will help the project get LEED gold, along with an adjacent geothermal water source that serves as a heat exchanger to supplement heating and cooling.

Sousie said the team expects to get LEED certification any day.

Construction went smoothly, Sousie said, even on such a tight site.

The site is at the end of a dead-end street and crews had to work with neighbors to get access. They had to back in oversized trailers because there was no turn-around space, and maintain access to an adjacent parking lot to serve Crossroads Community Center.

The site itself was small, with space for just one mobile crane.

Sousie said he has built two theaters and numerous concrete buildings, but nothing like this that combines both.

“It was a unique project and one that we will all remember for quite some time,” he said.