How a pharmacy was designed to limit exposure to toxic drugs

In October 2012, an outbreak of fungal meningitis was reported in the United States. The infection was traced to fungal contamination in IV fluid epidural steroid injections prepared by New England Compounding Center, a compounding pharmacy in Framingham, Massachusetts.

By March 10, 2013, 48 people had died and 720 were treated for persistent fungal infections. Subsequently, former NECC executives and technicians were indicted on a host of federal charges related to the outbreak.

This case illustrates the pivotal nature of infection control on compounding pharmacies. That’s where a regulation called USP-797, which focuses on sterile drug preparations, was shown to be critical.

Local compounding pharmacies, such as Seattle Children’s, Group Health and Virginia Mason began incorporating USP-797 as far back as 10 years ago. The state of Washington adopted it in 2013.

USP is an abbreviation for the U.S. Pharmacopeial Convention, a scientific nonprofit organization that sets standards for the identity, strength, quality and purity of medicines, food ingredients and dietary supplements. Its drug standards are enforceable in the U.S. by the Food and Drug Administration.

The design team started by sketching the flow of medicines from receiving bulk medicines to dispensing them to the patients. 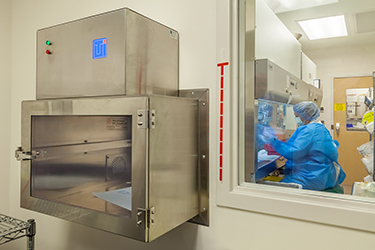 The project was directed to address the handling of hazardous drugs such as chemotherapy drugs in a similar fashion. However, midway through construction, the leadership of the pharmacy participated in a national conference that introduced a new proposed regulation for the handling of such drugs: USP-800. Specifically, the proposed USP-800 regulation has been created to identify the requirements for receipt, storage, compounding, dispensing and administration of hazardous drugs, including chemotherapy drugs.

This standard calls for a “containment segregated compounding area” — a separate, negative-pressure room with at least 12 air changes per hour for use when compounding hazardous drugs. In addition, it requires a low- or medium-risk “compounded sterile preparation area,” which serves as an anteroom for cleaning supplies and putting on protective gear.

The prepared drugs coming out of the compounding area are required to be transferred through the low- to medium-risk anteroom prior to being brought into an open air.

A change of plans

The team adjusted the plan to reflect this new reality.

The Swedish First Hill design included a combined anteroom for both. There is also a separate chemo storage room with an airlock pass-through to the chemo hood room. Since the clean/chemo rooms cannot be entered from this room, gowning is not required — allowing a great deal of flexibility for the pharmacists.

The new pharmacy layout resulted in work processes where product moves logically from one step to the next, staff minimizes walking distances, and orders are responded to in an expedient manner. Since all product must be reviewed and signed off by the pharmacists, the location of their work desks is pivotal to the pharmacy design.

Once signed off, drugs are dispensed through various methods: delivery to floors and clinics, tube system and stocking of automated dispensers.

Clearly, USP-800 has significantly impacted the space allocation of hazardous drugs and design of pharmacies, improving staff safety. The new pharmacy layout has also improved efficiency by creating a continuous flow from the raw stage to the final product.

R. David Frum is president of Salus Architecture, a firm specializing in design for health care.