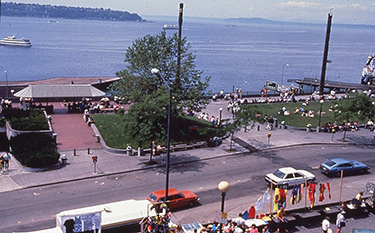 The city of Seattle plans to make improvements to Victor Steinbrueck Park, a petite bit of land with great views of Elliott Bay that is popular with tourists, homeless people, Native Americans and others.

But that does not sit well with Rich Haag, co-designer of the .8-acre park that opened in 1982 atop a downtown parking garage adjacent to Pike Place Market.

Haag said the improvements are part of a movement to gentrify the city's downtown parks.

“They fence off for construction and the patrons are denied (access) for such a period so they develop other modus operandi,” he said. “They move off to Ballard or the U District. It's sort of shuffling of the down-and-out people who need downtown parks.”

Seattle has issued a request for proposals due Aug. 3 for design of the $1.6 million project, which is funded by the 2008 Parks and Green Spaces Levy. That's according to a notice in the July 8 DJC.

David Graves, a strategic adviser in the planning and development division of Seattle Parks and Recreation, said the levy calls for improving lighting, landscaping and, for security reasons, sight lines into the park, and for “renovating” a children's play area that no longer exists.

A decades old leaky membrane over the privately-owned garage on which much of the park is built will also be repaired or replaced.

Under consideration is connecting the southwest corner of Victor Steinbrueck Park to the adjacent MarketFront mixed-use development now under construction, Graves said. MarketFront would lead to an Overlook Walk, and eventually to the waterfront, which the city is revamping.

“There is some early thinking,” said Graves, that that is “an attractive way for folks to get down to the waterfront.”

Victor Steinbrueck Park will likely function differently with that connection and when the noisy elevated Alaskan Way Viaduct the park overlooks is replaced by a downtown tunnel, he said.

“The dynamic in the park will start to change,” he said, and people may linger more.

Graves said the city realizes that “folks that are homeless need a place to hang out too” and it does not want to kick them out of the park. “But the more that more regular folks use it,” he said, “the more other regular folks will want to use it.”

One element of the levy work sure get attention is improving the sight lines into the park. That could be done by better lighting, tree trimming, or reconfiguring the park's berms, Graves said, but “the design is not in any way set.”

A designer should be on board by fall, and the city would like construction to begin in early 2017, with the park reopening in summer of that year.

It recently started holding performances in the small, but well situated park, but Graves said little has been done to physically improve it.

The city expects “some tension,” he said, over the proposed improvements to the park — a space people think is either perfect or terrible.

“There's just a lot of voices out there,” Graves said, and they will be heard in the design process, including homeless people, Native Americans, and those who live, work or own businesses nearby.

The Pike Place Market Historical Commission is one of those voices.

The commission in 2010 rejected adding a memorial to the homeless to the park, according to news reports, but the city's hearing examiner overruled it, and the sculpture was installed.

Haag is one of those voices. He is known nationally for his design of Gas Works Park in Seattle and gardens at Bloedel Reserve on Bainbridge Island, and is founder of landscape architecture department at the University of Washington. His co-designer on Victor Steinbrueck Park is the man for whom it is named. The now deceased architect led the fight to save Pike Place Market.

Graves said “Haag's view is the park has been successful and he doesn't want a whole lot of change — and I think there's some voices in the community that don't agree with that.”

Victor Steinbrueck Park is packed with tourists in summer, he said, but not with lots of “everyday folks” in the winter.

Haag said he's OK with some improvements to the park. That includes adding down lighting, which lights surfaces and activities, but doesn't bother neighbors or distract from the night sky. He also thinks new cedar benches should be replace ones already there, and blueberry plants and Aspen trees, like in the original design, should be added.

But Haag is opposed to any plan would lower the sculpted earth berms for better sight lines. That would insult the design integrity of the park and take away views and privacy from street traffic, he said.

Creating a connection to MarketFront, he said, would turn the small park into a concourse for visitors, rather than what it was intended — “a place to go to, not through.”

It would also discourage use by the homeless and by Native Americans from Seattle, Alaska, British Columbia and Montana who consider the park, with its two tall totem poles, a meeting place — a “last reservation” of sorts, Haag said.

The landscape architect said he is concerned the improvements might follow the pattern set by Occidental Park in the city's Pioneer Square neighborhood. There, a glass covered pergola designed by Victor Steinbrueck in collaboration with Ilze Jones, co-founder of the well regarded Jones & Jones firm in Seattle, was removed. Also, cobbles were replaced with concrete.

Changing Victor Steinbrueck Park to attract more people is just a bunch of hooey, he said.

“It is the most heavily populated park in Seattle,” Haag said, “and it doesn't need more attractions to draw in outsiders.” But, the city thinks “it's the wrong class people that are using it — the underclass.”