44 lane miles in Seattle will get ‘microsurfacing' 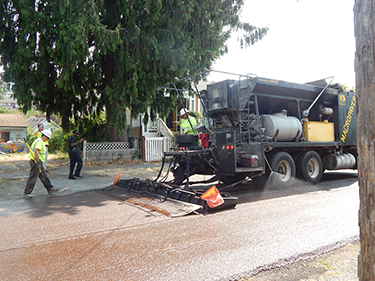 The Seattle Department of Transportation says microsurfacing is a cost-effective way to preserve streets because it helps prevent potholes and prolongs the life of pavement for five to 10 years before more costly repair is needed. The method works best where traffic is light and there are few heavy trucks or buses.

The budget for the microsurfacing is $4.5 million, which includes funding for an additional 18 lane miles that will be microsurfaced in 2016.

(Editor’s note: This story has been updated to add the project budget.)

Microsurfacing is a protective seal coat that includes a thin, tough layer of asphalt emulsion blended with finely crushed stone for traction.

Flexible pavements such as asphalt need periodic resealing to protect them from damage by rain and sun. If left untreated, the surface becomes brittle and may crack. Resealing prevents more extensive and costly repairs.

The city annexed several parts of King County in the 1950s and 1960s, and most of the streets in those areas had dirt or gravel surfaces. The city paved the streets with a minimal amount of asphalt and began a regular maintenance cycle, typically chip sealing the streets every 10 years.

Chip sealing, however, leaves roads rough and littered with loose rock. With microsurfacing, no loose rock chips are involved, so there is no need to sweep away rocks weeks after a project is complete.

As microsurfacing equipment moves along a street, the mixture of emulsion and aggregate is fed into a spreader box. The material is spread across the full width of a traffic lane and then smoothed by a squeegee.

Once the microsurfacing seal coat hardens, the street can be reopened and used normally.