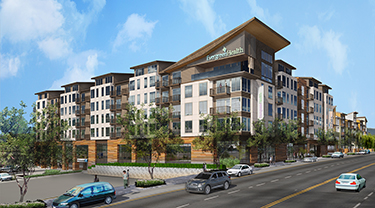 The project, called Linq at Spencer Square, will have 94 apartments and a 20,000-square-foot clinic for EvergreenHealth at 68th Avenue Northeast and Northeast 181st Street, according to a press release from MainStreet.

The five-story complex is expected to open in the first quarter of 2017.

As part of the project, MainStreet said it plans to add street parking along 68th Avenue Northeast, new sidewalks and pedestrian connections throughout the block. MainStreet will also underground all overhead power lines adjacent to the property.

Dahlin Group Architecture of Pleasanton, California, is designing the project and GenCap Construction Corp., an affiliate of MainStreet, is the general contractor. Another MainStreet affiliate, Insite Property Solutions, will be the property manager.

Linq isn't MainStreet's first project in Kenmore. Earlier this year it opened The Spencer 68, a four-building complex with 138 apartments, just north of Linq.

MainStreet's projects are part of the city's plan to make downtown Kenmore denser and more walkable. A new city hall, library and fire station have been completed. A Town Green is planned on a 20,000-square-foot site at the intersection of 67th Avenue Northeast and 181st Street Northeast. It will have a large civic plaza and a 5,000 square-foot community building that will include 1,000 square feet of commercial space.