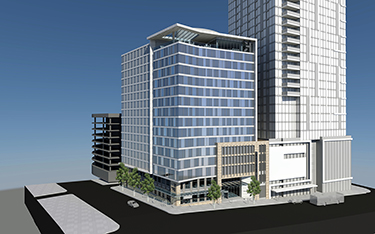 Image courtesy of Hogan Campis Architecture [enlarge]
Widewaters Group is planning a 230-room hotel next to the site where Equity Residential has started a 40-story apartment tower.

Widewaters Group is moving forward with plans for a 16-story hotel at Second and Stewart in Seattle.

The Syracuse, N.Y.-based developer filed for a master use permit for the project at 1608 Second Ave. The hotel will have 230 rooms and 3,300 square feet of restaurant space, and share the half-block site with a 40-story apartment tower that Equity Residential is building.

Equity Residential is constructing a five-level underground parking garage that will span the entire half-block site, serving as a base for the tower and hotel.

Equity Residential and Widewaters have been coordinating on the project for about two years, looking at structural, electrical, mechanical and other issues.

“Everything is about making sure their podium and our design will work together efficiently,” said Ed Shagen, Widewaters' vice president of hotel development for the western region. “As (Equity's project has) come out of the ground, even though we don't have full construction documents yet, we have had to progress our design to make sure it is going to work.”

Shagen said the hotel could start in the second quarter of next year, after permits are secured and Equity finishes the parking and structural work.

Hogan Campis Architecture of Atlanta is the architect of record for the hotel and Caron Architecture is a local consultant. Turner Construction is building Equity's project and also doing preconstruction services for Widewaters.

WTGBD, a joint venture of Weber Thompson of Seattle and GBD of Portland, is the architect for Equity Residential's project.

Widewaters will buy the site for its hotel. Shagen did not say what it will cost, but said the work that Equity Residential has done will be reflected in the price.

Widewaters will use one level beneath the hotel for back-of-house operations, and the rest will be parking for Equity's tenants. The hotel plans to contract with a nearby garage to offer valet parking.

Equity looked at several options for the surplus land including having parking under just its tower and selling the other half of the block.

Widewaters has built one project in the Puget Sound region: Home2 Suites by Hilton in Tukwila.

Widewaters also has projects in Portland, Eugene and Hillsboro, Ore.