After 55 years, Star Rentals moving from Seattle to bigger space in Kent 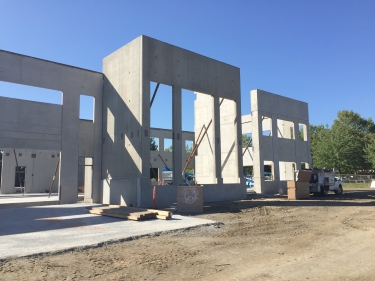 Poe Construction recently tilted concrete walls for Star Rentals' new headquarters at 21216 64th Ave. S. in Kent, and is installing the roof and painting the building.

Star President Bob Kendall said the company needs more space, but also wants to operate in an area with less traffic congestion than the Sodo neighborhood.

Kendall said he thinks traffic will get worse when the Alaskan Way Viaduct replacement tunnel opens because drivers will try to avoid it by traveling on First and Fourth avenues. If a new basketball arena is built south of Safeco Field that will bring more traffic to the area, he said.

The nearly 17,000-square-foot Kent building will have twice as much space for the 40 Star Rental employees who work in the headquarters and adjoining rental branch. The 3.5-acre site is more than three times the size of the current headquarters' site, with more space for equipment storage and maintenance.

Kendall said Star chose Kent because it is centrally located, with good access to Interstate 5 and state routes 167 and 405.

Poe is set to finish the building in February, and Star should open by the end of March.

Star Rentals will own the building.

Kendall said Star owns the property next door to its current headquarters and could build an express branch there in the future.

Star has 18 branches in Washington and Oregon. Its origins date back to 1900, when it was called Star Machinery and operated near what is now CenturyLink Field.