Fire stations in our region are typically very energy-intensive facilities for the following reasons: they are operated 24 hours a day, 365 days a year; they are home to six or more firefighters at a time — doing all their cooking, cleaning and washing; they serve as an office and training facility; and they contain a great deal of equipment that must be kept ready at all times in case of emergency.

Washington state has committed to reducing energy use in buildings by 70 percent by the year 2030. This is a challenging goal, but recent success stories of low-energy buildings demonstrate that it is an attainable goal. By carefully focusing on where all of the energy is going we can dramatically reduce the energy use in new fire stations to about one-fourth of the typical.

To figure out how to do this we started by carefully studying a similar nearby fire station. What we saw was that although these are 24/7 facilities, they are mostly empty for much of the day. The firefighters are not sitting around in the station waiting for something to happen. They are out answering calls, performing testing of fire-protection systems or fixing equipment.

However, the mechanical systems typically function as if all parts of the station are fully occupied at all times. To reduce energy use, the systems must be designed to respond to the actual demands of the firefighters. 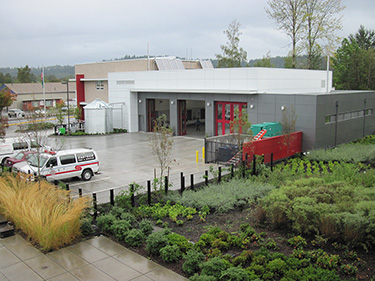 Photo courtesy of Ecotope [enlarge]
The building is heavy insulated and has triple-glazed windows.

At Station 72 we focused on reducing energy demand wherever possible. The heating loads were reduced by providing the building with high levels of wall, roof and floor insulation, as well as triple-glazed windows.

Since the station is always open, fresh air must be provided at all times. This requires a large amount of energy to heat up the ventilation air. An important component of the mechanical system at Station 72 is a heat recovery ventilator that strips the heat from the exhaust air and uses it to warm the incoming air, dramatically reducing heating energy use.

By super-insulating and providing heat recovery ventilation, we reduced the required size of the heating system to about one-third to one-half the size of a typical station, so we were able to shift money from the mechanical system budget to help pay for the extra insulation.

The primary heating and cooling at Station 72 is provided by a ground source heat pump system through hydronic radiant slabs. The building includes three small residential-scale heat pumps: one for heating, one for cooling, and one for hot water, with the ability to back each other up.

Using radiant slabs for heating and cooling creates a constant, even temperature in the station and eliminates the large amount of energy use associated with the fan systems used in a typical fire station. Only the sleeping rooms included small individual fan systems that can be adjusted by the firefighters so they can each have fast-responding control over the environment in their own room.

With a super-insulated building and ground source heat pumps for heating and cooling, domestic hot water heating became the largest single end use in the building. This is driven by three shifts of six people living in the building continuously, cooking, laundering clothes and showering two to three times per day each. To reduce the high domestic hot water load, low-flow plumbing fixtures and six large solar thermal preheat panels were used. The ground source heat pump system finishes heating the hot water.

To reduce energy use associated with lights and equipment we installed automatic controls. When there is an emergency call every second is critical, so firefighters do not stop to turn off lights and equipment. All nonessential equipment and lights at Station 72 are turned off automatically on vacancy sensors when the room is unoccupied.

Finally, solar electric panels on the roof provide about 20 percent of the total annual electrical energy demand of the station.

If this fire station were built to typical standards it would use over three times as much energy annually. This translates to a reduction of over 150,000 pounds of carbon dioxide per year that is not released into the atmosphere.

Direct reduction of water, materials and energy use are very important. However, perhaps the most important environmental impact is the example this station sets for the entire community.

Station 72 has a mission of maximum resource efficiency and minimum energy expenditure, given its critical role if the community should be in crisis. The station, which opened in 2011, is located in downtown Issaquah and abuts a busy transit center. Station 72 provides community education and a high level of visibility for energy efficiency and sustainable buildings.

Firefighters are a traditionally conservative group and are almost universally respected by the community. To have the firefighters visibly embrace sustainable buildings and practices helps to further convince the community that high-performance buildings are an appropriate response to climate change and dwindling resources that will impact future generations.

Jonathan Heller leads the Ecotope Design Team and has over 25 years of experience providing design, research, and consulting on energy and resource efficiency in the built environment.