WSU’s wine center aims to train next generation of winemakers 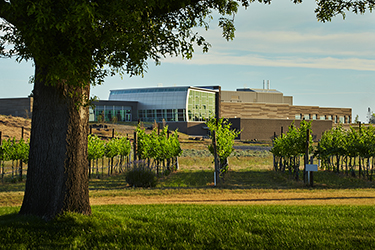 The design-build project was completed by Lydig Construction and ALSC Architects.

The center is the only one of its kind. It’s the result of vision, support and collaboration among WSU, state and local leaders, the Washington Wine Commission, and wine industry pioneers and supporters.

Constructing such a high-profile facility required a clear understanding of the center’s role in supporting Washington’s wine industry, careful consideration of the site, effective teamwork and skillful execution. During construction, Lydig took some unusual approaches to overcome the project’s particular challenges.

The building site is heavily sloped, so the center was designed with a daylit lower level that is created by large retaining walls along its north side. However, the lower level on the south elevation created a large excavation void on the north elevation that presented significant access limitations for Lydig and its crew.

In addition, the soil of the site consisted of sand and therefore could not hold a slope. The building design required that the retaining walls be braced with backfill before work on the upper floors could proceed. Accomplishing this would have involved bracing the 20-foot walls from the inside, but such bracing would have hindered the work of construction crews and trade personnel.

After extensive research, Lydig applied a counterfort system, which involved building concrete masonry unit gussets inside the building and attaching them to footings that had been enlarged in order to accommodate the gussets. Once these were in place, workers could backfill to the top of the wall on the north elevation without having to work around any bracing.

The wine center is located at the northwest corner of WSU’s Tri-Cities campus in Richland, at the corner of George Washington Way and University Drive. While this location is ideal for a center that is significant to Washington’s wine industry, the site presented its own set of challenges.

To begin excavation for the building pad and lower-level foundations, Lydig first watered the sloped, sandy site for three weeks. This would ensure that the soil would maintain a slope when excavation began.

Running through the middle of the site is a utility easement, which constrained the siting of the building, as well as grading and utility layout. Buried pipe in the easement had to be protected from the weight of heavy loads during construction.

The building is also nearly a quarter mile from the other WSU campus buildings, so planning and design efforts had to consider its connectivity to the existing campus data and telecommunications infrastructure. Extensions of the infrastructure had to be carefully planned so that future building sites on the campus would not be affected.

Much of the center’s winemaking equipment, including the state-of-the-art fermentation equipment, was donated. These donations occurred during design and construction, which required design revisions to the center’s electrical systems to accommodate larger and, in some cases, more demanding equipment with significant electrical requirements.

The design of the center is meant to invoke the concepts inherent in the winemaking process: taking ingredients in raw form and transforming them into a finished product. For the main winery production spaces on the lower level of the building, the finishes are primarily concrete and painted concrete masonry units for easy cleaning.

The upper level houses laboratories, administrative offices and classrooms. These areas have higher-end finishes, while the main lobby and the wine library in the center of the lobby have the highest level of finishes.

The wine library is cladded in a highly reflective plastic laminate that has the color of red wine. Because the lobby is wrapped on three sides with extensive glazing and lit strategically, the wine library can be seen clearly at night, glowing like a red jewel in the spacious lobby.

Displayed in the library are bottles of wine from the local wineries that made donations to the facility, as well as special wines from other sources. Both the lobby and the wine library offer upper-level views of the fermentation production area below.

A unique feature of the building, and one that turns the facility into a premier wine science center, is its cutting-edge fermentation control system. Designed by Cypress Semiconductor founder and CEO T.J. Rodgers, the control system is the latest version of a system first installed at the University of California’s Davis campus 10 years ago.

Rodgers donated the control system to the WSU wine center along with the 192 stainless steel fermentation tanks that are housed in the fermentation floor of the building.

Vince Campanella is a vice president of operations at Lydig Construction. Kris Toth is a Portland-based freelance writer.