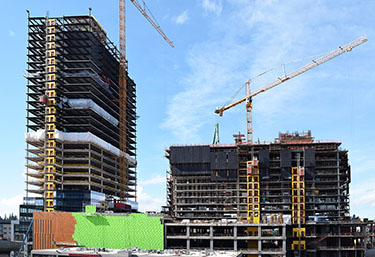 Kemper Development Co. is holding a topping out ceremony today for the office tower in its Lincoln Square expansion, which is across Bellevue Way from Bellevue Square.

The 31-story tower is part of a 1.5 million-square-foot expansion that is also adding a 41-story residential tower with 245-room W Hotel, a three-level retail podium and six levels of below-ground parking for 2,200 cars. The office tower is shown here on the left.

Structural engineer Cary Kopczynski & Co. says the expansion is the first major project to use steel fiber reinforced concrete in seismic coupling beams. This eliminates all diagonal reinforcing bars, and makes the towers easier to build.

Crews are integrating mechanical, electrical and plumbing systems into the tower's structural framing, which allows mechanical systems to feed through the floor framing, resulting in 9Â½-foot ceilings and an additional floor.

GLY Construction is the general contractor and HKS is the architect.

Kemper expects to open the new space next year.