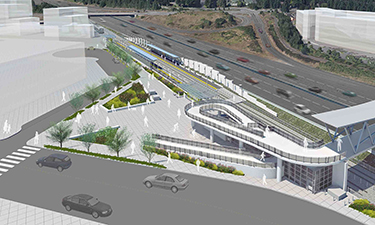 Images courtesy of Sound Transit [enlarge]
Overlake Village Station will be adjacent to SR 520, with the entrance along 152nd Avenue Northeast in Redmond. 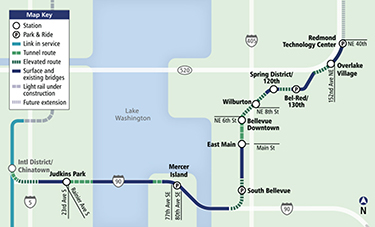 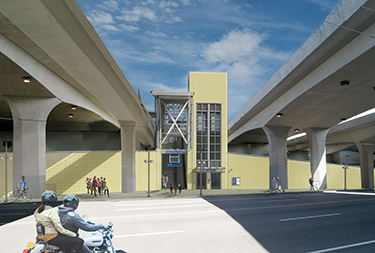 [enlarge]
Judkins Park Station will be in the middle of Interstate 90. Riders will enter the station from Rainier and 23rd Avenue.

The 14-mile route will run from downtown Seattle to Mercer Island and Bellevue, and then to Overlake in Redmond. Ten transit stations will serve the route.

Work already started on part of the project this week: demolition of several structures to make way for a 2,150-foot light rail tunnel through downtown Bellevue. The $121.4 million tunnel is being built by Guy F. Atkinson Construction. Rails, systems and transit stations are not included in Atkinson's tunnel contract.

The joint venture team of Kiewit and Hoffman Construction Co. in early 2017 will build 6.9 miles of track and two stations under a GC/CM contract that was awarded last year.

The new line will run mostly along Interstate 90 from International District Station to a point east of the East Channel Bridge. New stations will be on Mercer Island and near Rainier Avenue South — both consisting of platforms in the middle of I-90.

East Link is expected to open in 2023. A ride between downtown Bellevue and downtown Seattle will take 20 minutes. A trip between South Bellevue and Sea-Tac Airport will take 50 minutes. People on Mercer Island will be able to get to the University of Washington in 20 minutes.

Below is an animated video of the East Link extension.