$14M road project near airport will open land for development 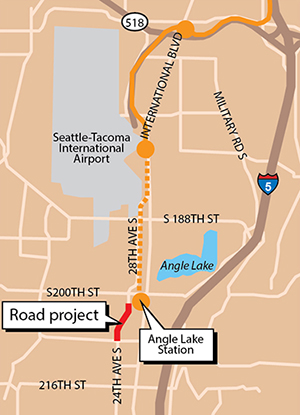 The city of SeaTac recently began construction on a road project that will connect 28th Avenue South in SeaTac with 24th Avenue South in Des Moines, and said this will open up 4.4 million square feet for new development.

The Port of Seattle owns most of that largely vacant land, which is located in several areas along the transportation corridor, according to SeaTac City Engineer Florendo Cabudol Jr. The port's property is zoned for commercial development, including warehouses.

Seattle developer Wright Runstad & Co. has an option to buy over 7 acres of the 4.4 million square feet, Cabudol Jr. said. That property also is adjacent to the corridor.

Wright Runstad has said it could build more than 1 million square feet on the land, which is at South 200th Street and 28th Avenue South, directly west of the future Angle Lake light rail station. The station is set to open later this year.

Wright Runstad's site slopes so the maximum allowed height for buildings there varies from 15 to 18 stories. The developer has said office space, a hotel and/or retail would make the most sense.

CH2M designed the half-mile road extension and Ceccanti, Inc. is building it. Work is expected to be done by August of 2017.

The extension will connect South 188th Street in SeaTac to South 216th in Des Moines and provide a new south access to Seattle-Tacoma International Airport and the Angle Lake station, which will have a 1,050-stall parking garage. Part of the new roadway will go over the future extension of state Route 509.

The road project will decrease congestion on International Boulevard (SR-99), create a new freight corridor and serve Des Moines Creek Business Park, the city of SeaTac said in a statement.

SeaTac estimates the project's economic impact will total $30 million for the city over 20 years, and support the creation of 15,500 jobs.

SeaTac Acting City Manager Joe Scorcio said the 4.4 million square feet represents the largest readily available land in the city next to a major roadway and near a light rail station.

He said the sites are large enough to be employment centers and have office towers, which generate jobs and revenue.

“We really needed this roadway to connect the commercial and industrial areas of Des Moines, SeaTac and the airport,” he said.

The $14 million project is funded by SeaTac, the Port of Seattle, Sound Transit, Washington State Department of Transportation, Freight Mobility Strategic Investment Board and the Transportation Improvement Board.

It is designed to accommodate the future extension of 509, which is being planned and scoped.

SeaTac's boundaries surround the airport, which is owned and operated by the port.