Photos courtesy of The Museum of Flight [enlarge]
The pavilion doubles the museum’s exhibit space. 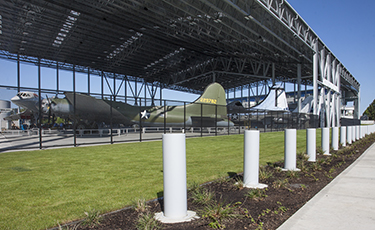 [enlarge]
A collection of rare aircraft is on display.

The Museum of Flight will open the $28.2 million Aviation Pavilion on June 25 with a collection of rare aircraft below the massive nine-story canopy.

The museum is at 9404 E. Marginal Way S. The pavilion is on the west side of the street, between Charles Simonyi Space Gallery and Raisbeck Aviation High School.

The 3-acre pavilion doubles the museum's exhibit space, and includes a cafe and children's play area with a mini airport terminal under the wings of the first 747 jumbo jet.

The exhibits will focus on the development of large aircraft and commercial airliners from the 1930s to the present.

Some aircraft won't be moved into the space until September, but a number are in place now. The roster includes a rare Boeing 247D; prototypes of Boeing 727, 737 and 747 jets; a Dreamliner test aircraft; the only Concorde on the West Coast; several military aircraft; and a 1958 Air Force One.

A former FedEx Boeing 727 freighter will house an interactive exhibit about the business of air freight.

Sunlight will be cast on those aircraft through 9,300 square feet of linear skylights. At night, 200 “smart” LED light fixtures will do the job.

The pavilion covers an area larger than two football fields. The base is a 12-inch-thick concrete slab on grade and 150 100-foot-deep piles supporting grade beam foundations.

The roof is supported by two 230-foot bays of 10-foot-deep joists on both sides of a 20-foot-deep truss. An 8-foot security fence runs along the perimeter of the site.

Sellen Construction was the general contractor and SRG Partnership was the designer.