Going beyond the mock-up with virtual reality

Hairdryers, bed linens and furniture are among the last items one might expect to encounter in a busy downtown construction site. Yet for today’s hotel builders, the practice of creating full-scale guestroom and hallway mock-ups — to help project owners and developers assess look and feel in the early stages of construction — is standard protocol.

Allowing key stakeholders to experience and evaluate the spaces early can avert costly reconfigurations during and after construction, accelerating project delivery and shaving costs along the way.

Six years ago, Mortenson Construction followed the same approach at Providence Everett Medical Center. To help staff test drive a model operating room, the project team built a metal-stud frame, covered the inside walls with paper and drew outlets, TVs, medical-gas connections and phones to depict their positions in a finished room. Paper shapes laid across the floor represented items like chairs, carts and operating tables.

Providence surgeons and other attending staff navigated around 2-D shapes on the floor with carts in tow, assessing the room’s layout for day-to-day usability. 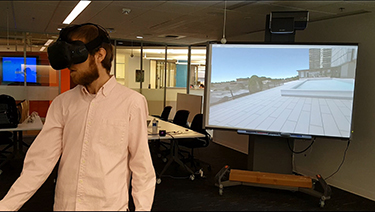 Photo courtesy of Mortenson Construction [enlarge]
An HTC Vive virtual reality headset is used to check out an amenity deck on a future building.

Yet rounding up a busy surgical team — to simulate an actual operating environment and the dynamics involved — proved elusive. Conveying to an anesthesiologist that a mark on the floor represented a doorway was not easily understood to mean that opening it would block an adjacent phone. In the case of hotels, keeping a mocked-up room dry on a construction site during a Seattle winter means building out temporary roofing and water management systems, an added cost and time element.

Fortunately, the commercial real estate and construction world is seizing on advances in virtual reality hardware and software, led by the gaming world, to supplant costly physical built-outs with immersive experiences nearly indistinguishable from the real thing.

Already in Seattle, the Mortenson team has fashioned VR models using the HTC Vive headset for the University of Washington Medical Center, the Tilt49 office project and the neighboring 41-story AMLI Arc apartment tower. The plan is to follow suit with the new Residence Inn by Marriott taking shape a block away.

In April 2015, Mortenson bolstered its integrated construction group in Seattle to extend the benefits of Oculus Rift VR technology to customers, among the first builders to do so. Stakeholders unaccustomed to interpreting drawings could now experience a building long before the ribbon-cutting ceremony.

Sarah Dreger, a senior integrated construction manager with Mortenson, recalls that while the Oculus Rift platform and headset was a game-changer, motion sickness was a recurring complaint.

The emergence of the HTC Vive has proven to be a massive improvement. When a user wearing the headset begins walking in the real world, the platform’s motion tracker translates those movements into their VR environment. The Vive accounts for varying user heights, and incorporates the perspective of mobility-challenged wearers.

Dreger’s group uses the open-source Unity gaming engine to build out fully immersive worlds for Mortenson customers and end-users to explore. The project architect’s design content is used as a starting point. Then, custom elements like hotel wallpaper and hospital trays are designed and imported in. Depending on the level of detail desired, a virtual model can be built in as few as two days.

“If you beam yourself up to a balcony on the 38th floor of the AMLI Arc tower in Seattle and accidentally walk off the edge, you really feel like you’re falling,” says Dreger when describing the lifelike environments. “It freaks you out. You have to look down and remind yourself, ‘It’s alright, I’m still in Kirkland, there’s carpet. We’re good.’”

Like physical mock-ups, engaging in VR walk-throughs can curb costly design changes before construction is underway or already complete. And without the mock-ups themselves, additional cost and schedule savings can be realized.

Mortenson allows Vive-wearers to toggle between day and night when standing on the 40th floor of the AMLI Arc amenity space, both a unique decision-making tool for the owner and a compelling sales tool for leasing staff. Those in the retail and hospitality verticals, meanwhile, can preview the sight lines their customers first experience when stepping foot in their built environment, an important branding consideration.

Similarly in a hospital setting, a surgeon can be transported into a future operating suite to test its work flow and ergonomics. Vive controllers lend the ability to manipulate the furniture, medical gas connections, monitors, light booms and even walls.

All users are equipped with a virtual pen to draw comments and suggest alterations in the virtual reality environment. Video and images of each VR session can be captured and shared, and changes can be cataloged for the project team to reference.

The future UW Central Utility Plant is among the many Mortenson projects to benefit.

“Before its completion,” says Dreger, “the university’s facility management staff will be able to answer, ‘When we get in there, will we have the room to service this pump? What kind of equipment can we fit? Will we be able to get a scissor lift in here?’”

From Disney to Seattle

Mortenson Construction’s Seattle office first used virtual design and construction modeling during its work on the iconic Walt Disney Concert Hall in Los Angeles in 2000, a project some deemed unbuildable due to the free-flowing nature of Frank Gehry’s design and its absence of 90-degree angles. In partnership with Stanford University and Disney Imagineering, the team borrowed advanced techniques from the manufacturing and aerospace worlds and applied them to construction.

The next leap came in 2006 during the completion of the University of Washington’s Benjamin Hall Interdisciplinary Research Building. To inform its design, Mortenson’s Seattle team outfitted a dark room with projectors that beamed a 3-D building environment onto the walls and floor. The resulting technology was aptly named CAVE — Computerized Automatic Virtual Environment.

CAVE was subsequently used by Mortenson offices across the country, including the team that brought Penn State University its Pegula Ice Arena in 2013. The use of CAVE helped avert $475,000 in changes by identifying them in the design phase.

An eye on the future

The newest virtual reality tools present a novel way to engage the community during construction, and to convey the benefits that may not otherwise be understood until the completion date.

Ahead of its work on the UW’s Computer Science & Engineering II building, Mortenson plans to post QR codes around the project site. With a $15 Google Cardboard viewer and their smartphones, students, staff and faculty will be able to immerse themselves into the project and experience the finished space, and learn about the various stages of construction.

In urban settings, engaging the community about potential impacts with innovative tools can help build support, trust and understanding.

In the coming years, VR hardware and software will continue to evolve at a rapid pace. Heightened processing capacities will enable multiple users to experience the same virtual space at the same time wirelessly, without being tethered to a PC.

Another anticipated arrival is augmented reality. For asset managers, this means looking at a piece of building equipment and instantly seeing the last time it was serviced, and how it has been performing.

“The use of virtual reality in design and construction is here,” says Dreger, “and as an industry we have the obligation to push its use to benefit the advancement of modern society.”

Phil Greany is a construction executive with Mortenson Construction in Seattle.