By JON SILVER
Journal Staff Reporter
Photo by Jeff Beck [enlarge]
The units are built by Oldcastle SurePods in California, trucked to the site and lifted into place with a crane. 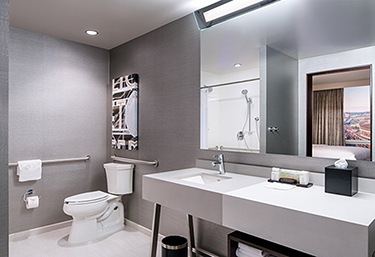 Image from the American Life website [enlarge]
Interiors are completely finished at the factory — including tile, mirrors, vanities and wallpaper.

The new Embassy Suites hotel in Pioneer Square will come equipped with a time-saving novelty but the guests won't notice: modular bathrooms.

The general contractor, Sodo Builders, is installing 282 prefabricated bathrooms in the 23-story tower, which is under construction north of CenturyLink Field. The last 90 units are set to be delivered over the next two weeks.

The prefab bathrooms are built by Oldcastle SurePods in a 50,000-square-foot factory near Fresno, California, and trucked to the site.

Sodo Builders installed the bathroom units for the first time in 2013 at a Marriott hotel in Los Angeles. This will be the first time Oldcastle's prefab bathrooms have been installed in a Seattle hotel.

Oldcastle is the North American arm of CRH, an Ireland-based manufacturer of building products and materials. Oldcastle has another SurePod factory in Orlando, Florida.

After units arrive on site, they're hoisted by crane to the floor where they will be installed. The units are wheeled on a pallet to their destination.

Once the bathrooms are in position, they're anchored into place and exterior drywall is installed. On-site contractors handle the air, electricity, water and drainage hookups, which they perform outside the units. The bathrooms themselves remain closed until it's time to finish the rest of the room.

Oldcastle SurePods says its units consolidate the work of more than 10 construction trades — including electrical, plumbing and finishing work — into one prefabricated product. Not only do the units save time, they eliminate the punch list for the bathroom, which Oldcastle calls “the most problem-ridden part of a construction project.”

The prefabricated units make sense for projects like hotels, dorms, hospitals, apartments and military barracks, where spaces are standardized. SurePods were also installed locally for a single-floor project at Virginia Mason Medical Center.

“If you're going to do highly complex four- or five-star hotel bathrooms, they're probably not going to work,” Steinhauer said.

Still, the units are adaptable enough to have been used in upscale hotels such as the Broadmoor in Colorado Springs and Baha Mar resort in the Bahamas.

Steinhauer said four to six different bathroom types will be installed in the Embassy Suites.

The SurePod factory in California can finish three to five units a day ranging from around 40 to 125 square feet. Each unit takes five to seven business days to complete.

According to the company, the units are designed using 3-D Revit modeling so they can be integrated into designs that use building-information modeling technology. Certain steps in the assembly are automated to improve the quality and measurement accuracy of the final product.

The process saves around 120 hours per bathroom on the jobsite, said Bill Seery, director of business development for Oldcastle SurePods.

For the Embassy Suites project, “that's over 32,000 labor hours that the contractor doesn't have to subcontract,” Seery said. “That frees all the trades to focus on other areas of the building.”

Interiors are completely finished at the factory — including the tile, mirrors, vanities and wallpaper — so the units must be engineered to arrive at the jobsite in one piece. Units are encased in steel framing and use moisture-resistant wallboard, which is glued and screwed into the framing.

“We have a variety of methods that we've refined,” Seery said. “There are a lot of different factors you have to account for.”

The units have a five-year structural warranty, and one year for material and workmanship.

Oldcastle SurePods has been building prefab bathroom units since 2004, and has installed 20,000.

Seery said once the units are in place, people can't tell the difference from normally built bathrooms.

He said he checks travel review websites like TripAdvisor to see if anyone has noticed a difference at any of the dozens of hotels where SurePods have been installed. So far, no one has.

The units in the Embassy Suites will be for floors 15 to 23.

The hotel is part of a two-tower development by American Life. Freiheit & Ho Architects is the designer. Sodo Builders is the construction division of American Life.

The second tower will be an 18-story office building that shares a seven-floor podium with the hotel. Work on the first office floor above the podium begins next week.

Seery said Seattle is a good market for prefab bathrooms because labor costs are high here, and contractors are having a difficult time finding enough skilled labor.

“It can make a lot of sense to move the bathrooms offsite,” he said.

Steinhauer of Sodo Builders said bathrooms are the most complex part of a hotel room, so his company only sees advantages building them elsewhere.

The cost, he said, is roughly the same either way.

“Even if (the units) cost more, we think they're a better value,” he said.