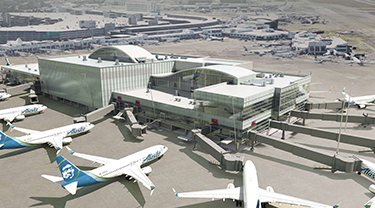 Images courtesy of Port of Seattle [enlarge]
Eight new gates will be added — for a total of 20 — and the terminal will be extended. 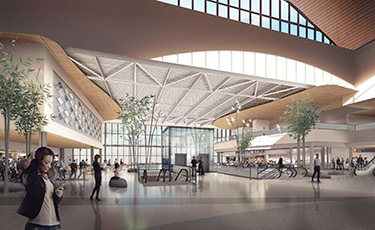 [enlarge]
There will be a mezzanine, and more dining and retail.

The Port of Seattle has released images showing the latest design for a $549.9 million modernization of the north satellite terminal at Seattle-Tacoma International Airport.

Eight new gates will be added — for a total of 20 — and the satellite will be extended 240 feet to the west, with another 181,000 square feet. The renovated terminal will have an upper-level mezzanine, twice as much dining and retail space, and a rooftop lounge for Alaska Airlines, the sole carrier in the terminal.

Separately, Alaska Airlines will spend $36.8 million to finish the lounge and employee spaces.

The port's five-member commission agreed to add $7 million to the budget yesterday to pay for a redesign of what will be the third floor. The redesign will add lounge space, allow a better restaurant layout, and provide another 3,000 square feet of leasable space.

The 40-year-old terminal has received only a few updates over its lifetime, and many of its basic systems need to be modernized, according to the port.

Work will also include behind-the-scenes upgrades such as seismic, mechanical, electrical and communications improvements. The team will seek LEED certification.

The port's portion of the funding will come from a combination of airline fees and the Airport Development Fund.

Groundbreaking is scheduled for the first quarter of 2017, and the first phase is slated to open by mid-2019.

A second phase starting in the second quarter of 2019 is scheduled to open in spring 2021.

Crews have already begun to construct some of the systems that will be used for aircraft parked at the N Gates.

“This project — which will include new gates, increased dining and retail options, and more robust Wi-Fi and connectivity — is critical for meeting the region's needs at Sea-Tac Airport for the next 25 years,” said Port of Seattle Commission President John Creighton in a statement.

For the past two years, Sea-Tac has been the fastest-growing large hub airport in the United States. July was Sea-Tac's busiest July ever — with almost 4.7 million passengers — nearly 300,000 more than July 2015.

The airport has also set annual passenger records for the past five years, totaling 42.3 million in 2015.

The port considers the north satellite project to be part of a larger $636 million plan for terminal improvements, which includes work on the main terminal and satellite baggage systems as well as already completed exterior walkways on Concourse C.