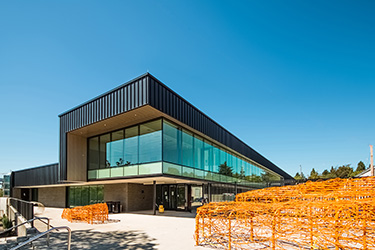 Photo courtesy of Integrated Design Engineers [enlarge]
There will be a community event Saturday at the site.

It will handle garbage, recycling, and food and yard waste. The complex houses a tipping/transfer building, a reuse/recycling building and an administration building.

SPU will hold a community celebration at the station from 10-11:30 a.m. on Saturday.

“The new North Transfer Station is a big investment in the future of Seattle,” said Mami Hara, SPU general manager and CEO, in a statement.

“This facility allows us to have less of an impact on the environment, while safely and sustainably handling the increasing waste demands of our growing city.”

The utility expects the transfer station to serve the city for at least 50 years.

The old north station, which had been on the same site, was built long before recycling was introduced, and was designed to process all solid waste as garbage.

Residential and commercial haulers will use separate entrances to improve traffic flow and safety. New routing for customers is expected to decrease lines of vehicles that spill out onto neighboring streets.

The new station has more covered and enclosed spaces than the old station, better ventilation, and entrances and exits designed to reduce noise and odor in the neighborhood.

Two 90-ton compactors were salvaged from the old station, and reused in the new station to cut costs.

The project will seek a LEED gold certification. The station includes two green roofs, pervious paving, translucent panels for natural light, and solar panels that can produce up to 150 kilowatts of electricity.

East of the station, the utility created about an acre of open space to buffer the site from neighbors. The park has a children's play area, sports court, lawn, walkways and exercise stations.

Artist Jean Shin created a series of lacelike artworks for the site called “Reclaimed” that were composed of nearly 10,000 feet of recycled rebar salvaged from the site during demolition and painted bright orange.

Seattle Public Utilities was the project owner. CDM Smith was the prime consultant, Mahlum was the architect and Lydig Construction was general contractor. Integrated Design Engineers was the engineer of record for station's steel structures. CDM Smith was the structural engineer for the concrete, and the Greenbusch Group was the mechanical engineer. HBB Landscape Architecture was the landscape architect.