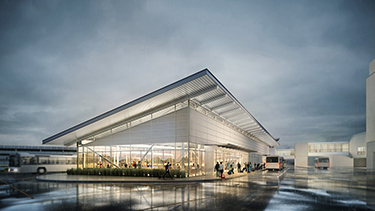 Image by HOK [enlarge]
Passengers will enter the main terminal, and walk across an enclosed bridge into this holdroom building, where shuttles will take them to flights.

The Port of Seattle has selected The Walsh Group to construct a $24.2 million holdroom building that will serve hardstand passengers at Sea-Tac Airport.

Hardstands are spots on the apron where planes can park, but they are not connected to the terminal by a jet bridge. Shuttle buses move passengers between the hardstands and the terminal.

The 32,400-square-foot holdroom building will be built off of Concourse D in the North Ground Transportation lot, which is currently used for ground operations and transportation to cruise ships.

The two-story LEED silver building will have up to seven gates, passenger seating, Wi-Fi, restrooms and limited concessions. The design will complement the existing Gina Marie Lindsay Arrivals Hall and Concourse A.

Departing passengers will enter the main airport terminal, then walk across an enclosed bridge at Concourse D into the holdroom building, where shuttles will take them to their flights. The holdroom will have both static and dynamic signage to ensure passengers move efficiently in the space.

Port spokesman Perry Cooper said construction will likely start in September, after the cruise season ends. The building is expected to open in summer 2018.

The holdroom is technically a temporary building, but is designed for a 20-year life. Cooper said officials hope they won't have to use it that long. The port's total budget for it is $38.4 million.

The port wants to add 35 gates to the airport by 2034 due to projected growth, and the hardstand operations will help alleviate crowding in the interim.

The holdroom design-build team includes Walsh as the design-builder and HOK as the lead architect, along with Lund Opsahl, Osborn Consulting, Hart Crowser, Casne Engineering and Notkin Mechanical Engineers.

HOK is designing improvements for other airports across the country, including those in Salt Lake City, New York City, Atlanta, Oklahoma City and Tampa.

Walsh is part of the HOK team working on improvements at LaGuardia Airport in New York. Walsh has built major projects at airports in Los Angeles, Chicago, North Carolina and Sacramento.