What can Seattle area learn from Mexico City's quake experience? 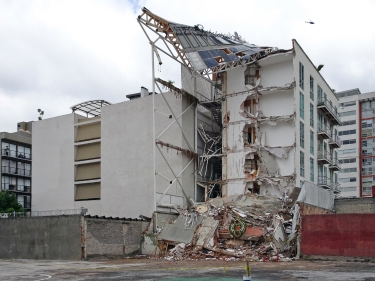 Photo by Erik Bishop/Reid Middleton [enlarge]
Part of this apartment building in Mexico City collapsed in the quake. An adjacent bridge was closed to prevent vibrations from further damaging the structure.

Just days after the 7.1 earthquake hit Mexico City in September, Reid Middleton had two teams of engineers from three offices en route to help with the aftermath and learn how different structures performed in a real-world test.

The first team focused on buildings and critical facilities while the second team covered lifeline systems, infrastructure and resilience.

Each team spent about a week in Mexico City and surrounding areas, with the first arriving several days before the second.

David Gonzalez, a structural engineer and manager of the San Diego office, led the first team. Gonzalez, a native of Mexico, was at a conference in Sacramento when the quake hit on Sept. 19. His team from San Diego, Everett and Honolulu arrived in Mexico four days later.

Gonzalez said the first thing that struck him was how quickly people responded. “(On the way there) I didn't know what to expect,” he said.

He said he was surprised at how well the community was organized and how quickly they were ready to rebuild.

“‘We've been through this before, we can do it again,' was their attitude,” he said.

Erik Bishop, a project engineer from the Everett headquarters, was on the second team.

Bishop said he, too, was impressed at the way people helped one another, such as miners who came from other towns not affected by the quake to help search for victims in the rubble. Architecture students helped to track which buildings had been evaluated.

“Pretty powerful to see,” Bishop said. “The human response was rather profound.”

Team one's mission was to help local engineers with assessments and tagging of damaged buildings. One of the first observations was that many modern high-rises didn't appear to be significantly damaged, at least from quick exterior observations.

Most of the damage was in mid-rise and shorter buildings.

At one site, the team investigated a five-story building with columns on the first floor that appeared to be sheared through the middle of the span, indicating it was on the brink of collapse. The team found that this building likely had a “soft-story irregularity,” where one floor is less stiff than those above. 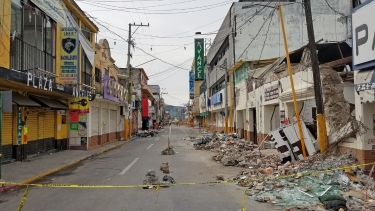 Photo by Erik Bishop/Reid Middleton [enlarge]
Damage was extensive on this main street in Jojutla, south of Mexico City.

Bishop said many of the buildings that collapsed had unreinforced masonry walls confined by non-ductile concrete frames. Most of those buildings were erected in the late 1960s and early 70s, according to Gonzalez.

Teams found that similar building types sustained more damage in Mexico City than in nearby Puebla, which was closer to the epicenter. Gonzalez said a big contributor to that was ground liquefaction amplification, which Mexico City is prone to since it was built over an ancient lake bed.

That is one similarity to Seattle, where some areas are built over soft fill.

David Swanson, director of the structural group at Reid Middleton, also witnessed the aftermath of the Mexico City quake. In a blog post, he compared it to the Nisqually quake that hit Seattle in 2001, which had less powerful shaking and a shorter duration than scientists expect from an overdue quake along the Cascadia Subduction Zone here.

Swanson blogged that the deadly 1985 earthquake in Mexico — that hit 8.0 on the Richter scale — was more indicative of what to expect from a Cascadia Subduction Zone quake here: powerful shaking that lasts for several minutes.

Bishop also said there are some similarities between the recent quake in Mexico and the Nisqually quake, but it's tough to compare them. Initial estimates of damage in Mexico City are roughly $2 billion, about the same as the Nisqually event.

Bishop said there are more vulnerable buildings in Mexico City, but the ground in Seattle is more complex. He said “the big one” in Seattle would have different consequences, depending on whether it came from the Cascadia Subduction Zone or the Seattle Fault.

If plates in the Cascadia Subduction Zone fully slipped, the result could be a 9.0 quake that could last several minutes and affect areas from California to Canada, he said.

Gonzalez said there are about 1,000 unreinforced masonry buildings in Seattle, many in older neighborhoods such as Pioneer Square. He said the city is identifying them and providing technical recommendations for retrofits. A study about mandatory retrofits was recently finished, and the city is waiting to act on it.

“We are the last city on the West Coast to deal with those buildings,” Gonzalez said.

California passed a law in 1986 that required local governments to inventory unreinforced masonry buildings and establish quake risk reduction programs for those buildings.

Even Oregon is a bit ahead of Washington, he said.

Gonzalez said there was a push to modernize and upgrade building codes in Mexico after the 1985 quake. The result, he said, is a fairly strong building code but it's still about 10-15 years behind what the U.S. has done. He said no collapses were noted in buildings built to the latest code in Mexico.

Reid Middleton teams also observed many buildings that were retrofitted with braces, frames and, in some cases, diagonal cables crisscrossing the exterior.

Swanson blogged that the exoskeleton retrofits appeared to perform well in September's quake. He said the recent quake was a good test, but not the ultimate test for those buildings.

In addition to damaged buildings, team two found broken waterlines and several roads where the ground had settled as much as 2 feet. The government provided several large water tanks for people affected by the broken pipes. The tanks were filled by water trucks. 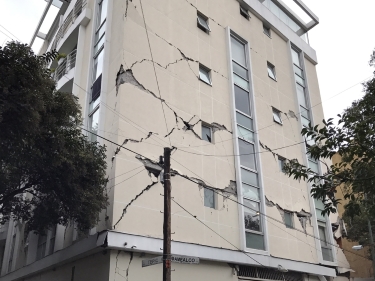 Photo by Kenny O’Neill/Reid Middleton [enlarge]
This apartment building in the La Condesa area of Mexico City had significant cracks in the shear wall.

What can Seattle do to better prepare for a big quake? Bishop said we need to continue to retrofit critical infrastructure, promote public awareness, improve post-event response, and invest in technology such as early warning systems and sensors that can show how much a building moves during a quake.

Gonzalez said the Mexican government in the recent quake enabled the military to set up a high-level disaster plan, where troops quickly set up security around collapsed buildings and assisted displaced civilians by pitching tents in parks. The government also channeled domestic and international donations, and organized international relief teams.

Gonzalez said the mayor of Mexico City several years ago set up a fund for natural disasters that now has hundreds of millions of dollars. He said the city plans to use 30 percent of that plus insurance proceeds to rebuild.

This isn't the first time that Reid Middleton engineers have visited regions hit by large earthquakes — they have been to Chile, Japan, New Zealand and several other countries since 1995. Swanson has been in 10 post-quake zones, Gonzalez in four and Bishop in three.

Gonzalez is president of the Washington Chapter of the Earthquake Engineering Research Institute. He said the chapter will likely hold a seminar in early December on the team's observations from the recent quake in Mexico.