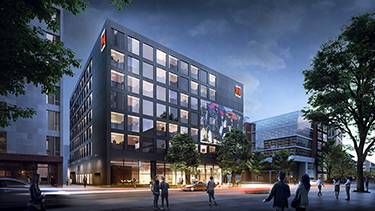 Image from Gensler [enlarge]
CitizenM is building this 264-room modular hotel in Seattle’s South Lake Union neighborhood. At seven stories, it will be substantially shorter than a 350-foot-tall modular hotel in New York City that designer Danny Forster says will be the world’s tallest.

Forster is a proponent of structural steel modular high-rise construction. His firm, Danny Forster & Architecture, is designing what he calls the world’s tallest modular hotel in New York City.

The hotel is planned for a site at Sixth Avenue and West 29th Street in Manhattan. Forster said it will be about 350 feet tall and 100,000 gross square feet. Crews are now demolishing an old building to clear the site.

An eye-opener about the project is its 170 rooms are being fabricated in Krakow, Poland.

When finished, the rooms will be loaded onto a ship and sent to Brooklyn, where flatbed trucks will take each unit to the jobsite for installation. Each module will be 12 feet wide and 30 feet long.

Forster said units will arrive in America completely finished and furnished — from TVs to soaps in dishes in the bathrooms. He said they will be plug-and-play for jobsite workers, who will connect power, HVAC and plumbing to utility corridors in the hallways.

Units will be “unstacked” from the ship by year end. Crews will build a floor a day using eight units. They will never enter the locked units during construction.

Forster said the big advantage is that the units are being built in Poland while his firm is still finalizing designs for the hotel. He said manufacturing modules during the design phase speeds up the completion date by as much as 25 percent over traditional construction.

Building in a factory also creates a perfect construction environment that is immune to weather and other factors, he added.

Forster said there are great craft workers there, like those found in the rest of Eastern Europe, and the manufacturers are all located close to one another, which leads to greater efficiencies and some cost savings.

Forster said there are only a few U.S. firms that fabricate modular steel and he isn’t satisfied with them for a job as high as the Manhattan hotel will be. He said the U.S. is a leader in low-rise modular wood buildings, but struggles with high labor and steel production costs when it comes to modular steel buildings.

“We need to start thinking about modular in a more serious way (in the U.S.),” he said.

Forster said just because a building was put together in modules doesn’t mean it has to have a boring design. He said if this method allows you to build at less cost, then there are opportunities to use higher quality materials or make a fancier facade.

“Just because we stack the boxes doesn’t mean it has to look like stacked boxes,” he said. “If you look at stick building towers versus modular, you’ll never know how we did it.”

Forster’s love for modular has manifested itself in a new TV show for FYI Network called “Prefab Nation.” The pilot episode, recently shot in California, centers around a family that gets its house replaced with a modular home built by Los Angeles-based Proto Homes.

Forster broke into television while in Harvard’s Graduate School of Design. He said his girlfriend, as a joke, sent him a Craigslist ad seeking a host covering architecture for a TV show. He submitted a three-minute movie and landed a gig with the Discovery Channel hosting “Extreme Engineering.”

After shooting six episodes of Extreme Engineering, Forster returned to finish his master’s degree at Harvard. He said a day after graduation he got a call from the Discovery Channel offering him his own show called “Build it Bigger.”

Build it Bigger ran for five seasons and took Forster around the world to epic construction sites: from being 1,600 feet in the air on a skyscraper to landing in a helicopter on the back of a top-secret naval vessel.

Later, Forster would work with Steven Spielberg as a creator and producer of a miniseries documentary that chronicled the effort to rebuild lower Manhattan in the wake of 9/11.

Most recently, he was executive producer and on-screen host of a three-part documentary for Discovery International called “How China Works.”

Forster said he didn’t have a keen interest in architecture until a teacher one day explained the differences between Romanesque and Gothic arches. He said learning that the arches got their shapes for specific uses “blew my mind” and changed the way he looked at the world.

Forster said buildings are shaped the way they are for a reason. He cited the wedding cake designs of the Empire State and Chrysler buildings in New York City as prime examples: zoning laws required setbacks to reduce shadows on the streets below.

“Really, a bunch of lawyers were responsible for their designs,” he said.