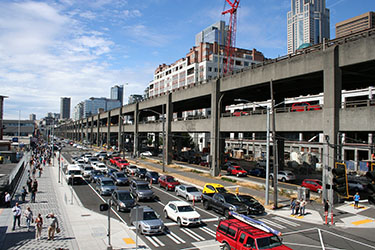 Photo by Benjamin Minnick [enlarge]
Work will include demolishing the central section of the viaduct, filling the Battery Street Tunnel and connecting surface streets near the tunnel’s north portal.

By June, the Washington State Department of Transportation plans to pick one of four shortlisted contractors to demolish the Alaskan Way Viaduct in Seattle.

WSDOT will issue a design-build best-value contract for the project, which is estimated to cost between $80 million and $100 million. That's a bump of $20 million over previous estimates.

WSDOT said the price for demolition has gone up because of “added scope,” specifically replacing the Marion Street pedestrian bridge and additional utility work.

(Editor’s note: This story has been updated with details about the price increase, and to correct the spelling of Brian Nielsen’s name.)

Demolition will likely start in the fall, but no schedule has been set.

Combining these three projects under a single design-build contract is expected to shave a year off the construction time.

Work on the cast-in-place viaduct will involve removing most of its 397 foundations and footings to five feet below grade. An on-ramp at Columbia Street and an off-ramp at Seneca Street will also be removed.

The first step in the demolition job will be moving traffic from under the viaduct to Alaskan Way along the waterfront. Initial demolition will remove part of the viaduct to make room for a new road near the stadiums.

Demolition will be performed in sections to localize the disruption.

Nielsen said parts of the viaduct near buildings may have to be cut into pieces and removed by crane. That would be slower and more expensive than traditional methods.

The demolition contract includes removing the Marion Street pedestrian bridge that crosses below the decks of the viaduct to connect with the ferry terminal. A temporary replacement bridge is included in the contract, but not a permanent bridge.

Nielsen said the contractor will be fined if demolition takes longer than nine months.

WSDOT will have to close the viaduct for three to four weeks before the replacement tunnel opens along the waterfront. This closure is needed to realign state Route 99, finish access ramps and connect the highway with the tunnel.

There's some good news for drivers: no tolls will be charged for at least a month after the tunnel opens. WSDOT will need time to test tolling systems. Tolls will be set by the Transportation Commission.

WSDOT is seeking a noise variance from the city in order to work around the clock on the project. The agency estimates that working 24-7 will cut the time it takes to demolish the viaduct by 40 percent.

Among other things, WSDOT is asking to extend “impact” construction for five hours past the standard 5 p.m. cutoff. Impact construction includes operations like jackhammering. No impact equipment would be used between 10 p.m. and 7 a.m., though WSDOT told the four bidders that 8 p.m. is better for stopping noisy work.

When working at night, the selected contractor also will have to refrain from idling equipment for more than 5 minutes, have a noise management and mitigation plan, and use strobe lights instead of beepers when backing-up vehicles.

Noise monitors will be used to enforce those standards.

The contractor also will have to give three days' notice to residents and office workers within 300 feet of the work zone when operating at night.

But it will be a different story when it's time to take down the ramps at Columbia and Seneca streets: WSDOT is seeking up to seven days of 24/7 impact work at each ramp.

Nielsen said it's expected to take 40 days to demolish each ramp.

Part of the viaduct extends over BNSF Railway tracks near Pike Place Market, between Stewart and Virginia streets, where it is supported by two 210-foot-long steel girders. Demolition here means following BNSF's schedule, which requires work only from 1 a.m. to 4 a.m. on Saturdays, Sundays and Mondays. This work must be finished within 51 nights.

The southern mile of the viaduct was demolished in 2011-12 by Rhine Demolition as part of a larger project to replace that section with a new side-by-side roadway. Skanska USA Civil was the general contractor.