A trip inside our new ‘smart' tunnel 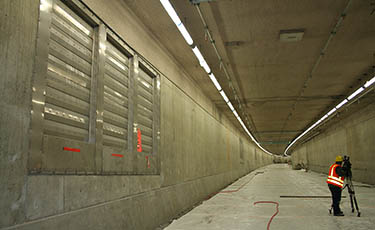 Photo by Benjamin Minnick [enlarge]
Large louvers like this one on the left will open to ventilate smoke from fires in the tunnel.

Seattle Tunnel Partners recently installed the last of the 1,152 precast concrete panels that make up the lower roadway in the 2-mile-long waterfront tunnel.

Now crews are turning their attention to operations and safety systems — the primary components of what WSDOT says will be one of the “smartest” tunnels around.

“I get goosebumps when I go into the tunnel. It's such an accomplishment,” said David Sowers, WSDOT deputy program administrator.

A new video posted by WSDOT describes how the tunnel gets its smarts. You can see it at https://tinyurl.com/WSDOT-SmartTunnel.

The smart tunnel starts with wall-mounted sensors that sample the air every few seconds and turn on ceiling-mounted jet fans when emissions reach a certain level.

Normally, vehicles traveling in the tunnel will pull enough fresh air with them to keep emissions low, but when traffic goes below 30 mph more ventilation is needed.

If a car catches on fire in the tunnel, wall-mounted louvers will open and giant exhaust fans will automatically kick in. Smoke will get sucked into the tunnel's ventilation corridor and exit through the large yellow stacks atop the north and south operations buildings. Each of the four stacks is outfitted with a fan.

Fires will be detected by more than 8 miles of fiber optic heat-sensing cables that run along the tunnel's ceilings. The system activates fans and sends an alert to tunnel staff, who can monitor the situation through cameras and operate the fire sprinklers.

Sprinklers can be activated in more than 100 different zones to spray the fire — not the entire tunnel.

If things get really dicey, motorists can abandon their vehicles and follow flashing emergency lights to an exit corridor with its own ventilation system. In the case of an evacuation, motorists would walk in a protected passageway to an exit stair, and up to the surface.

At least two tunnel operators will be on duty at a time, and the tunnel will be powered by two substations for redundancy.

One of the final steps for the new tunnel is the commissioning phase, which recently started. This phase is testing more than 3,000 devices, 5,000 lights, 2,000 valves and 500 catch basins that make up some of the smart systems.

Susan Everett, WSDOT program design manager, said the goal is to finish commissioning by fall. She said crews are nearly finished commissioning the buildings that serve the tunnel.

Tunnel components will be tested at least three times during the commissioning stage: first to make sure they work, then to verify they work in concert, and finally that they work with other systems. Once certified, STP will hand over the tunnel to WSDOT, and another contractor will connect SR 99 to the tunnel.

Before the tunnel opens, WSDOT will have to close the viaduct for three weeks to switch traffic.

Sowers said STP is scheduled to finish tunnel construction in mid-August. The tunnel could open as early as October.

“We have a couple of milestones that are coming up in May that will give us a better projection as to when or if STP will make the August date," Sowers said. "Once those tests are done, we’ll have a better feel on the fall schedule.”

For the lower roadway, crews are about half finished with a concrete overlay that is 1.5 to 2.5 inches thick. The overlay is needed to smooth expansion joints between the 8-foot-long and 32-foot-wide panels.

Workers from Long Painting and Metro Painting are applying coatings to tunnel walls on the upper deck. Long is spraying walls with a white primer and will follow with a final coat of light gray. Metro is pressure washing and will stain lower wall sections with a slightly darker shade of gray. The lower wall sections have built-in traffic barriers.