Over the past few decades, there has been steady progress in the building industry toward producing projects that are environmentally sensitive and energy efficient.

This movement is spearheaded by the global efforts of the United Nations Intergovernmental Panel on Climate Change, regulatory agencies like the Environmental Protection Agency and the Department of Energy, and cities, states and companies.

Standards such as the U.S. Green Building Council's LEED rating system and the Living Building Challenge have become synonymous with sustainability. Their fundamental goals are to sustain natural resources, promote occupant health and reduce life-cycle waste and pollution to safeguard prosperity and opportunity for future generations.

Despite the positive influence of the sustainability movement, it is imperative to look more broadly at how the work we create connects to the systems we are part of. Resilient design, with its emphasis on withstanding and recovering from the impact of shocks and stressors, is the natural evolution of sustainability. Sustainability relies on resilience. 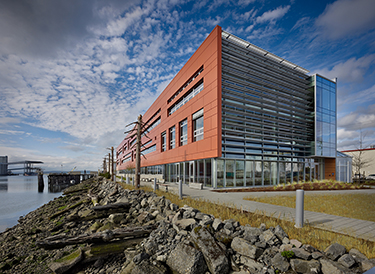 For example, what if a hospital could be designed to remain operational — and energy- and water-self-sufficient — in the event of a disaster? What if an office tower provided safe shelter, food, water and emergency supplies for days after an earthquake?

There are numerous issues creating an urgent need for a holistic design approach. Pollution continues to accelerate biodiversity loss through atmospheric degradation and contamination of land and water.

The frequency and severity of natural disasters is on the rise due to climate change. Exponential population growth means more people are impacted by climate-related displacement, economic disparity and competition for finite resources.

In the Pacific Northwest, it is essential to prepare for shocks such as earthquakes and flooding in design planning. We are experiencing warmer and drier summers that affect thermal comfort, agriculture and ecology. Recent Canadian and eastern Washington forest fires resulted in weeks of poor air quality. Projections forecast more severe storms and rising waters.

A recent University of Washington study highlights the disparity in life expectancy between higher- and lower-income neighborhoods. Resilience planning should include policy and strategies that bolster all demographics. Designs must respond not only to the threat of acute shocks but also to issues posed by chronic stressors such as income inequity, aging infrastructure, and access to transportation, food and water.

In the U.S., there are cities, states, communities, corporations, universities and institutions that are making resilience planning a priority. 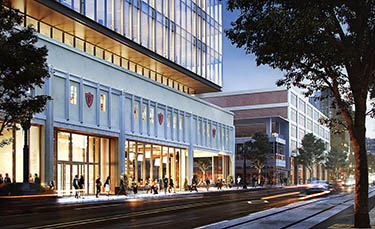 Image by Perkins+Will [enlarge]
The 400 Westlake tower in South Lake Union will produce and store enough energy to provide emergency lighting and a week’s worth of refrigeration.

Examples of these efforts include the Department of Housing and Urban Development's National Disaster Resilience Competition, World Bank's Urban Risk Assessment and the Rockefeller Foundation's 100 Resilient Cities program. Seattle is currently formulating its strategic plan based on a resilience workshop held in 2016.

In 2014, Perkins+Will, along with the Institute for Market Transformation to Sustainability, began development of RELi. This comprehensive action list was created to assist architects, city planners, developers, governments and businesses to design buildings, communities and neighborhoods to better withstand and recover from shocks and stressors. In a report prepared for the Energy, Kresge and Barr foundations, the Meister Consultants Group identified RELi as the only standard holistically addressing facilities and communities, including social vulnerability.

At Greenbuild 2017, USGBC formally announced its adoption of RELi. This means the standard will become a global rating system, similar to but independent from LEED.

Credits unique to the standard include adaptive design for extreme rain, sea level rise and storm surge. RELi also supports robust systems with credits that require projects to participate in or establish organizations that build community cohesion, and social and economic vitality. RELi is currently being used by pilot projects across the country.

Designs that are regenerative and replenish essential systems contribute to resilience. For the Center for Urban Waters in Tacoma, Perkins+Will looked for ways to reintroduce biodiversity and restore the area's original habitat, which served as an osprey migratory path before becoming heavily industrialized.

Tree snags for bird perching were installed along the Thea Foss Waterway and large trees were anchored in the water along the bank to create shaded areas for fish and wildlife. Several weeks after the building was complete, users saw an osprey perched on one of the snags, signifying that ecological restoration had begun.

The project incorporates self-sufficiency through on-site energy production and storage, providing emergency lighting for 10 percent of the building and refrigeration needs for one week. In addition, the project is committed to net-positive energy, which means it will generate more electricity than it needs to operate.

Since the roof area available for solar panels is not sufficient to produce all of the building's power, additional panels will be installed at an off-site location. This strategy, called scale jumping, enables others to benefit from distributed power.

Rating systems are successful when they focus our aspirations and influence related industries to value environmental stewardship. Green design minimizes our impact on the Earth, however even the most sustainable projects are susceptible to shocks and stressors.

Resilient design, including innovative actions developed in RELi, challenges us to be proactive and inclusive as we address social, economic and environmental vulnerabilities. By embracing our diversity and interconnectivity, we can inspire an industry transformation that fortifies sustainability.