All told, the facility encompasses over 300,000 square feet of renovated and new building area. Construction was completed in six phases over five years, with design beginning in late 2011.

Projects of this scale are complex and involve many players and moving parts. With a design team primarily located in the Puget Sound region — over 1,000 miles from the client, the Natrona County School District — it was important for the design team to have a strong local component. Wyoming-based firms such as Amundsen Associates, Lower & Co. and Adolfson & Peterson Construction provided that connection.

This team worked tirelessly over the project’s six-year duration to breathe new life into an iconic historic structure while providing additions that both complemented and celebrated it. This transformation resulted in a modern, full-service high school that can be a source of pride for the community for decades to come. 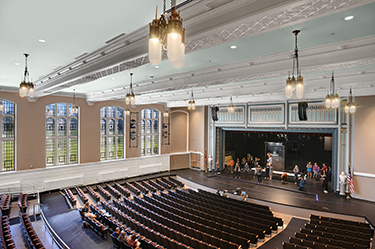 While there were many success stories along the way, one of the greatest examples of the project’s continual partnerships was the transformation of the theater complex.

One of a small handful of full-service auditoriums in central Wyoming, the John F. Welsh Auditorium is home to NCHS drama and music programs as well as the Wyoming Symphony Orchestra and many traveling shows. Restoring this cultural resource would ensure a home for performing arts patrons in Wyoming for years to come.

Each detail of the renovation was addressed with care, such as the fully functioning fly loft stage and new orchestra pit, the reconstructed plaster ornamentation that dressed the seating areas, and the historic main school entrance that doubles as the public lobby to the theater.

Structurally, this entailed complete reconstruction of the on-grade seating bowl to accommodate updated seating lines, modern accessibility and the construction of a modern orchestra pit. It also included all-new rigging and catwalk structures within the nearly 50-foot height of the existing stage, and new catwalks over the seating areas.

With the majority of the project team working long-distance, close coordination and teaming among the many disciplines was essential, along with support from the construction manager.

One success was the design of the roof structure over the seating areas. At this location, the structural, mechanical and theater consultants worked closely with the help of as-built information from the local team members to achieve a very thorough analysis of the existing long-span, riveted structural steel trusses that spanned the auditorium.

The team used the analysis to determine where and how new loads could be supported with only very minor improvements to the existing trusses. This collaboration reduced required work in the field, which kept schedule and budget concerns in check while still supporting the lighting and conditioning needs of a modern theater space.

The team also worked together to develop cost-effective solutions to reconstruct and support ornate plaster ceiling features, which were tied seamlessly into the historic plaster finishes along the sides of the space.

In the back of the house, similar collaborative efforts among the construction manager, structural and theater consultants allowed for installation of large amounts of new structural steel within the existing stage loft boundaries to support the fly loft system. This was all completed atop an existing concrete pan-joist system that was shored to allow placement of construction loads without damaging the existing floor.

The only hiccup in the construction process occurred when excavation of the orchestra pit revealed unstable soils, causing settlement and damage to one of the historic plaster proscenium jambs that had been slated for preservation.

The team dealt with the issue quickly and efficiently, from early triage of the conditions by the local structural engineering team members to a hands-on design charrette involving the architect, structural engineering team and contractor teams. The resulting solution allowed construction to continue with minimal schedule disruption, and costs were minimized to the greatest extent possible.

In the end, the team successfully completed the project within budget and approximately one year ahead of the original schedule. Close collaboration among dedicated team members near and far resulted in the beautifully restored performance space, which celebrates Natrona County High School’s storied history while updating it with all of the function of a 21st-century theater.

Bret Maddox is an associate principal with PCS Structural Solutions in Tacoma and a proud Wyoming native. He served as project manager for the NCHS project and has over 25 years of structural engineering experience in the Pacific Northwest.