WSDOT shifting lanes under viaduct into new alignment along waterfront 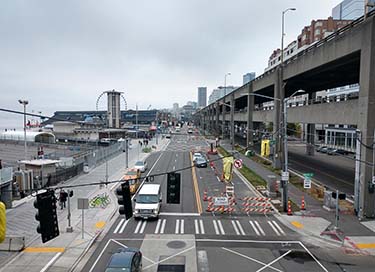 Photo by Benjamin Minnick [enlarge]
Crews this weekend will open more lanes along the waterfront.

The end is near for the Alaskan Way Viaduct, and WSDOT this weekend will be moving its detour route from below the viaduct to a new alignment of Alaskan Way along Seattle's waterfront.

The move is one of several steps needed before crews can demolish the viaduct, likely starting in February.

And here's some good news: the new alignment has two lanes in each direction, double the current layout under the viaduct.

“Lanes are striped and everything is ready to go,” said David Sowers, WSDOT deputy administrator of the Alaskan Way Viaduct Replacement Program.

WSDOT in 2012 shifted several blocks of Alaskan Way to below the viaduct to clear space for constructing the tunnel that will replace the viaduct.

Sowers said the new stretch will run between South King Street and Pier 62/63, near the Seattle Aquarium.

The shift will require closing Alaskan Way along the waterfront from 8 p.m. Saturday to 10 a.m. Sunday. Detours will send drivers mostly onto Western Avenue. Ferry riders will still have access to Colman Dock.

WSDOT will create 250 new temporary parking stalls below the viaduct once the road is moved. That will result in a net gain of at least 70 stalls after accounting for stalls lost in the new alignment. Some stalls will be for taxis.

WSDOT also will close southbound lanes on the viaduct from 9 p.m. Friday to 5 a.m. Monday so that Scarsella Bros. can finish paving near Atlantic Street as part of the tunnel project.

Then, the following weekend, WSDOT will close the entire viaduct for a final inspection of its structural integrity.

The viaduct is scheduled to permanently close Jan. 11, as crews begin three weeks of work to realign state Route 99 from the viaduct into the new tunnel. Demolition will begin after the tunnel opens.

Kiewit Infrastructure West Co. was picked in May to demolish the viaduct under a $93.7 million design-build contract. The work area covers 1.4 miles, from South Dearborn Street to Battery Street Tunnel, and includes removing ramps at Columbia and Seneca streets.

A decision to close the viaduct in January rather than this fall has Kiewit reevaluating its schedule. A WSDOT spokeswoman said they hope to get a final schedule this month from Kiewit.

Sowers said the northbound on-ramp to SR 99 adjacent to the Triangle Pub at First Avenue South and Railroad Way South will likely be demolished first, followed by removing the Columbia Street on-ramp.

Removing the northbound on-ramp will allow crews to connect streets to a new intersection adjacent to the tunnel's south operations building. Taking down the Columbia ramp will allow Metro to move forward on its plan to turn part of Columbia Street into a bus corridor.

Sowers warned that commuters must change how they get around during the three-week closure. He said a nine-day closure of the viaduct in 2016 while tunnel machine Bertha passed below was good at first, but then people gradually reverted to old commuting patterns and congestion ensued.

More than 90,000 vehicles use the viaduct daily.