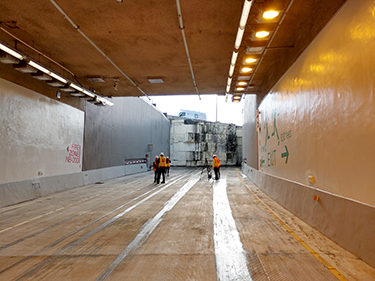 Photo by Benjamin Minnick [enlarge]
Crews in January will remove these geofoam blocks to open a northbound ramp into the SR 99 tunnel.

Crews will have their hands full getting the new waterfront tunnel open by early February, especially during a three-week span when state Route 99 will be closed in downtown Seattle.

“We still have a lot of work to do to get ready for that closure,” said Dave Sowers, WSDOT deputy administrator of the Alaskan Way Viaduct Replacement Program, at a press conference yesterday at the tunnel's south end.

One daunting task during the closure, which starts Jan. 11, will be removing a 150-foot-deep wall of geofoam blocks that were installed in 2014 where Seattle Tunnel Partners had built a northbound ramp into the tunnel. Geofoam blocks were used to fill part of the ramp so that a temporary detour could cross over the top. The rows of blocks taper from 20 feet high near the tunnel entrance to about 1 foot.

Amjad Omar, chief inspector at WSDOT, said each block weighs about 100 pounds. They will be removed one-by-one using forklifts, loaders or a crane. He estimated that will take two or three days.

“They are easier than gravel to haul off,” he said.

The blocks will be recycled at Kent-based InsulFoam, where they were originally made. Omar didn't know how many blocks fill the ramp.

After the blocks are gone, crews from Scarsella Bros. will shotcrete traffic barriers on both sides of the ramp and stripe the roadway.

Scarsella crews will also remove detours at the north end of the tunnel during the three-week closure. That work involves removing a temporary geosynthetic wrapped earth embankment wall to connect a ramp into the tunnel.

Scarsella will spend another two weeks after the tunnel opens connecting a new northbound SR 99 off-ramp that feeds into a new intersection near the tunnel's south operations building.

Demolition of the viaduct will begin sometime after the replacement tunnel opens. Kiewit Infrastructure West Co. earlier this year won a $93.7 million design-build contract for that job.

Early documents indicate the Columbia Street ramp will be one of the first pieces of the viaduct to come down.

Cassandra Manetas in WSDOT's Mega Projects Office made a presentation before the Pioneer Square Preservation Board on Wednesday that included a briefing on how the Columbia ramp will be demolished.

Manetas said preliminary plans from Kiewit have crews closing Columbia Street from First to Western avenues for the first phase of ramp demolition. Work will continue westward to Alaskan Way.

Manetas said as demolition moves west, Kiewit will isolate work zones to prep for removing the next segment while restoration is done in the demolished areas.

The plan shows the work zone from First to Post Alley being restored and reopened to the public as crews prep and remove the ramp from Post to Alaskan Way.

Sowers said he is fairly confident that the SR 99 closure will not exceed three weeks. He said two or three days have been set aside for weather delays.

“It's going to be difficult to get around during the closure,” he warned.

The closure will not only affect the 90,000 drivers who now use the viaduct each day — it also will affect transit and bus routes.

Bill Bryant, managing director of service development for King County Metro, said 12 bus routes that carry 30,000 riders daily will be affected by the three-week closure, many of them originating in West Seattle.

Bryant said a second water taxi to West Seattle will be added and more parking for those ferry riders.

Metro will also alter some routes and have 20 buses on standby during rush hour, in case of congestion. Still, every route into downtown will likely be affected.

Bryant said bus riders should expect 10-minute delays on “good” days and up to 1-hour delays on “bad” days, though the longer delays should be fewer.

Bus congestion will get worse downtown in March, when Metro changes the bus tunnel to light rail only.

Heather Marx, director of downtown mobility for Seattle Department of Transportation, said other major projects over the next five years will change how people get through downtown.

“Be prepared, know what your new route is going to be,” Marx said.

Some relief will come in 2023, when Sound Transit opens its East Link light rail line, she said.